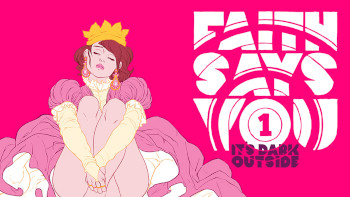 Faith Says You Vol 1: It’s Dark Outside by Kate Brown

I backed this book on Kickstarter, and the second volume is launching in a couple weeks, which prompted me to grab Faith Says You off my unread shelf. Meh — was, unfortunately, my primary reaction. It’s not bad, but it doesn’t give me a glimmer of why I should continue with the series.

The story centers on Joanna, and it’s set in the mid-90s in a British seaside town. Joanna seems to be right out of high school and works as a maid at a hotel. She has a boyfriend Chris, who’s also been her lifelong friend. One day she saves a young woman from committing suicide, and this woman claims to be the messiah.

Those things happen in the first few pages. The rest of the Faith Says You features Joanna dealing with her anxiety and some unnamed/undeveloped trauma with her family (who is absent from the narrative). She pulls away from Chris (who’s going away to college soon), is technophobic, and the messiah shows up with words of comfort.

While there are intriguing elements, they flatten out as the story continues. I’m not sure if the messiah is supposed to be a metaphor for Joanna’s self-discovery or mental illness, or if the word “faith” in the title is full-on religious faith and future volumes will feature the messiah bringing peace and happiness to the word. Or at least to Joanna.

The art flow is lovely, and Brown leans into the visuals, but they alone cannot float this story. The colors are muted until the very end.

At the very end, Joanna seems to have decided to die, and the messiah appears. She takes Joanna out of the cave (which will fill with water at high tide and was the same way the messiah tried to kill herself) and onto the cliffside. Together, they jump off, holding hands. Instead of falling, they fly through the air. Here the colors change and become bright.

This is where the story leaves us. For me, I won’t be picking up volume 2 because there’s no hook. There’s no forward movement or intrigue to keep me wanting to know what happens next. Joanna has floated off the cliff, never to return.