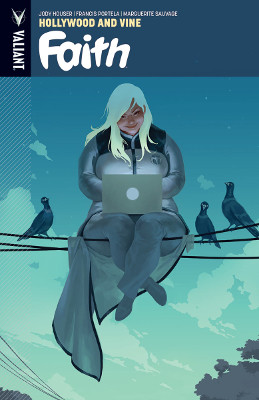 I was really excited to read this. Disclaimer: Valiant gave my ladies comic book club free comics of the first volume. Faith was an enjoyable story, but it didn’t quite stand out in the storytelling ways that I’d hoped it would.

The biggest drawback was the art. Portela’s pencils were extremely inconsistent. One of the greatest thing about this book is having a plus-sized superhero and having zero comments about her weight. However, Portela drew Faith inconsistently. Sometimes she had larger bellies or multiple chins more than in previous scenes.

There were also inconsistencies in clothing choices and fashion. When in her alter-ego Summer, Faith dresses down and in a disguise to be essentially transparent and invisible in public. She probably has one of the best secret identify differences I’ve seen. Except Portela doesn’t quite get fashion or Los Angeles weather. Faith wears so many layers, including her high-necked costume under everything, that she’d be sweltering in LA. So many terrible turtlenecks that I can’t even imagine what horrible fabric they’re made from.

Similarly Mimi, Faith’s editor, wears outdated clothing. I could forgive Faith-as-Summer, but Mimi would be for sure extra fashionable. Almost everyone in LA is.

What made me more wistful was that during the book’s dream sequences, Sauvage did the art. Her pencils are not only beautiful, but they gave fashion and style to the book. They gave consistency to Faith’s body and expressions. I really wanted her to pencil the entire book.

Okay, for the actual story, I hadn’t read anything with Faith before, and the only other Valiant book I’ve read was a Dr. Mirage story. Houser hinted here about Faith having some major trauma, including death of teammates, which caused her to move to LA. And also break up with her boyfriend and rethink her superhero life. But in this book, Faith seems very happy-to-go lucky. She deals with the problems that come up.

Faith shows a little jealously over her ex-boyfriend Torque and his new girlfriend. (Who conveniently turns out to be part of the bad aliens trying to take over the planet.) And the plot itself is a bit loosey goosey. Faith stops a serious alien invasion, but we don’t really get much of an intrigue.

Sadly, I don’t feel compelled to read the next volume. Perhaps if they replaced Portela on pencils.