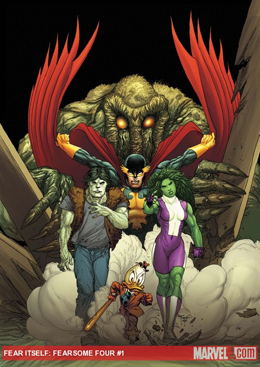 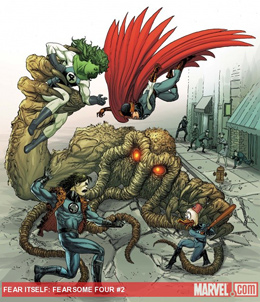 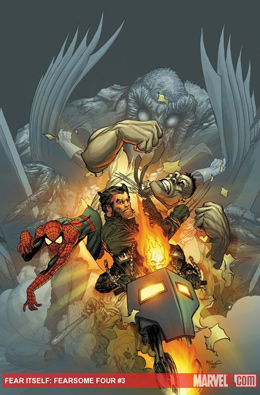 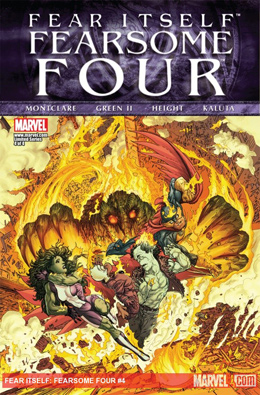 Let’s start off by talking about the art: I am not a fan of Kaluta’s art as I learned this week while reading two books with it. His style just doesn’t fit my aesthetic, and I think that it makes everyone look old. Especially those young kids who are killed by Man-Thing. They shouldn’t look 16 going on 45.

Bodenheim’s art was rather middle of the road. It seems very animation-based.

Bisley’s art, on the other hand, looked really fun. I pulled up his website, and it looks like he does a lot of horror-style art. Which I think fits very nicely with this title. Pre all the heroes getting warped by the Nexus of All Realities, I thought he had a fun take the characters, especially She-Hulk, Howard the Duck, and Man-Thing.

As for the story itself… I’m not reading the main Fear Itself title. I do think the introduction gives you an idea about the main plot, and I didn’t find myself needing to fill in gaps. She-Hulk, Howard, Nighthawk, and Frankenstein definitely have their own mission to subdue Man-Thing from setting all of NYC on fire or blowing it up.

As a She-Hulk fan, I’m enjoying all the tie-ins to her other days, and I hope that amongst all the fear, Montclare finds the time to giggle a bit.

Ugh, this book was just everywhere and the constantly changing art didn’t help at all.

I really don’t like books where She-Hulk is portrayed as incompetent. I mean, it’s just fine for her to have the wacky sidekicks, who are D-listers. Her comics can be fun and interesting that way. However, that doesn’t mean she’s a mess.

For about half this comic, Howard is freaking out that they’re going to kill each other instead of focusing on their mission to stop Man-Thing. The incompetence bleeds through into the lack of coherency. Then as Frankenstein’s story of capture and torture is told and they fight the big bad, things feel just as unfocused. Ugh.

This book just got a lot more cohesive. Montclare is a much better writer when he’s using people’s inter-monologues to lead the action. The book seemed far more polished and put together than the first two issues.

Spider-Man, Ghost Rider, the Hulk, and Wolverine would make a really bad team, and I liked the comparison of them to the Fearsome Four. I liked that the twist was that they weren’t good guys and part of Psycho Man’s plan.

Yeah, Yancy Street is a big mess. I loved She-Hulk’s dialog about being a hero. I was afraid for a second that it was going to become a little too much like a Spider-Man responsibility speech, but it didn’t. The Hulk giving her sexist crap was just bad. It felt a little out-of-place, like that was the only insult Montclare could think of. Hulk couldn’t make a comment instead about his cousin being too caught up in her books to fight?

I’m glad to see that Montclare’s finding his Howard the Duck voice. However, halfway through your miniseries is a little late.

I still don’t understand exactly what they’re trying to do to Man-Thing. Or what it will look like when he’s subdued.

Such a mediocre comic book, sigh. I wish this book had been better, and the only reason I picked it up is because of my love for She-Hulk. No other reason.

I do think the narrative voice got better, but the revelations about fear and the characters becoming brave weren’t something new. They weren’t revelatory in any way. I do think that perhaps there were too many character, and I feel like Montclare started realizing that as he focused more on just Howard (and on She-Hulk, the issue before).

I’m also not sure what I learned about Man-Thing that I didn’t already know. And any miniseries where they can’t put one artist on it for the entire four issue run is just going to be at a major disadvantage for coherency.