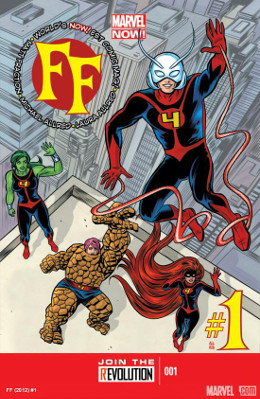 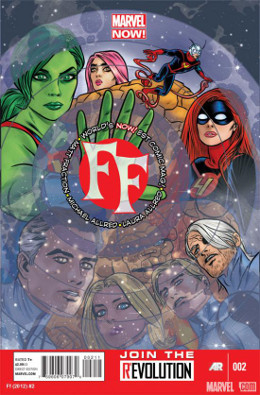 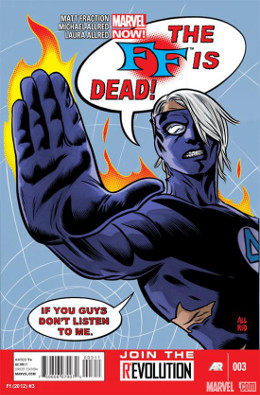 Interesting premise to start the book. I had no idea that Scott Lang had been brought back from the dead or that they killed off Cassie. (I do not approve of killing Cassie.)

I’m so happy that She-Hulk’s in a book again. And while it makes me sad that they don’t think she can carry a title on her own, I hope that Fraction and Allred draw enough people in and others find the She-Hulk love.

Medusa was an interesting choice for this book too. Seems like she’d be too busy to take on the responsibility. (Even if it’s just for FOUR minutes, yeah, right.) I’d more expect Crystal.

I do totally dig that this team is made of three women and only one man. I also like that Fraction is re-using his favorite interview type style. But I thought it was fun that it was done backwards.

I hope that the kid characters work well into the story instead of being annoying, considering they’re whom the Future Foundation was built for.

This title is pretty cute. I love that Medusa is a bit lost in her morning routine in the Future Foundation building. You’d think they would’ve build some stuff to help her out. There are, after all, a lot of people and machinery there.

Speaking of machinery, the machine that goes “boop boop” cracks me up. And that no one knows what it does. Not even Scott.

The Mole Man is ridiculous. She-Hulk should be able to take out him and his creatures without help. I have a hard time believing that the three of them would have such issues.

I don’t blame Darla for walking out. Though the Thing suit’s great.

I’m completely loving this title. I’ve been waiting a while for a book that’s a funny one and fun. I can see both Fraction and Allred just having a blast with FF.

I laughed so much at them bringing in Wyatt Wingfoot to tell if Johnny Storm is really Johnny Storm. (He’s pretty cracked if he is.) I love She-Hulk vouching for her ex-boyfriend and his honesty. Because it’s Wyatt, the ultimate boy scout. It’s clear that while others may try to bring back Silverage nostalgia, there’s 80s love here.

I’m not sure what I think about the Moloids bringing in the Mole Man for a rallying point for the FF. But kids will be kids. Or Moloids.

The whole thing with the Yancy Street Gang cracked me up. Even if it meant that Darla ran around in her towel the whole time. Though I totally appreciated that while I expected her to go out the door and find a bunch of paparazzi, that instead it was New Year’s. And of course, Scott didn’t kiss her. He has lots of anti-moves like that.