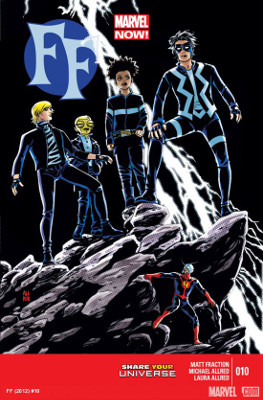 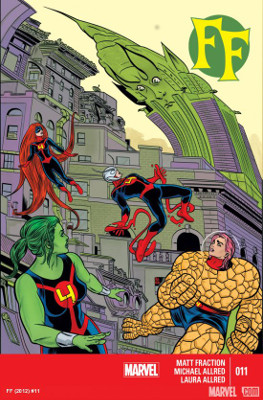 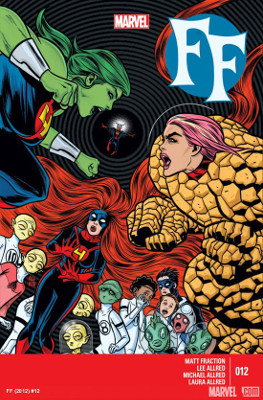 I’m so not into authors self-indulging themselves and putting themselves into their comics. I realize Fraction’s not the first one to do this or it’s the first time he’s done that. (He and Ed Brubaker appeared in The Immortal Iron Fist.) And certainly, one character, She-Hulk’s known for breaking the fourth wall and having her creative team join her story, even if just for a bit of narrative.

However, while the entire Marvel U consists in a place where comic books are recorded histories, I was pretty surprised to see it pop up in this book. In fact, it took me two tries even to get into this issue.

Even with a microtiger! Which I’m totally with Leech and Artie Maddicks, making tiny tigers sounds awesome. Though I’m pretty sure my cat already considers himself a tiger.

I kind of think Impossible Man naming his son, Adolph Impossible, is a little more ridiculous than anything else in the book. That name alone would give someone panic attacks and just have them want to spend all their time hidden in a library.

I love that Medusa once again steps up and comforts a child. She’s far more effective in taking care of children than the rest of them. Of course, it might do them good to not go off on missions without the children or one of them staying behind to take care of the children.

Totally bummed that Fraction’s off this book. It was one of my favorite due to the both the art style and the fun writing style. It’s not that FF can’t tackle serious issues — like’s Scott’s grief over Cassie’s death — it’s just that it knew how to have fun. It had heart, and it could be lighthearted and wacky in many moments, while being poignant and touching.

I’m glad to see that Fraction’s plots will be playing out, even if he’s not the direct pen behind the book. So far, it’s very true to the spirit and there’s nothing out of left field happening. Except that they all disappeared at the end, but that’s not out of the realm for this book.

I love that Darla and Scott’s almost romance keeps getting ruined. Mostly by Scott’s ineptitude or seemingly ineptitude. Also that Turg’s trying to take romance lessons from Scott. Hilarious.

Adolf and Luna being friends is super cute. Somehow I think the adults would be less than thrilled at the kids watching Avengers anime-style. In that, they seem to want the kids to grow up to save the world with their brains more than their superpowers.

I would like to see this story go on and on forever.