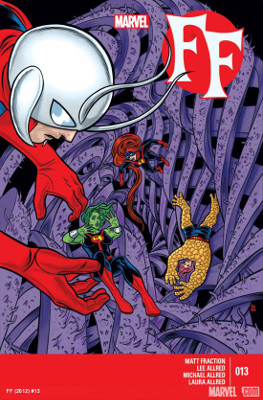 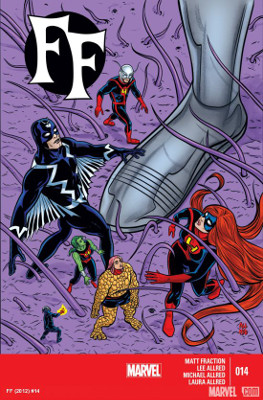 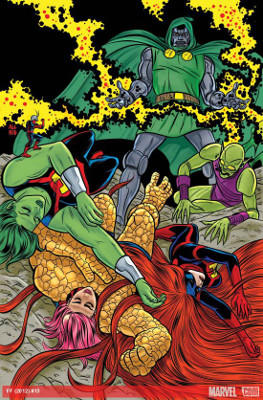 Nice to see someone using the Watchers as the FF invade Uatu’s house. To me, the Watchers have always been a tired, pointless set of characters used for expositive narrative that authors felt needed to be included. I’m all about characters who can make more decisions than inaction.

For a book with a ton of characters, the story does a great job at making sure you know who’s who, even without looking at the front. There are a ton of children.

Unsurprising that Scott’s lecture to Alex on how he’s been a bad example to the other children was mostly about how Scott feels about his own parenting.

Jen freaking out about being on the Impossible Man’s shorts was a little much. I’m hoping that Lee Allred will know how to grow her character in the story. I feel as if the other adult characters have had much bigger emotional arcs and Jen’s has mostly been about rekindling her romance with Wyatt and being really strong.

I really enjoyed Michael Allred’s art, especially when they were tying up Uatu. He does such a great job at proportions, especially when realizing the size differences between Uatu, Jen, and Medusa.

The Red Ghost’s plot was silly and cute. The kids accidently saving the day is always amusing. Especially in that the broken food machine could only create bananas, which they fed to the Red Ghost’s ape henchmen.

I’m not a huge fan of the on-going Doctor Doom plot, but we’ll see how it goes.

Cargo Manshark definitely leads the way as my favorite character. Or perhaps I just want a tiny tiger as a pet too.

I love these sorts of issues where problems are worked on, but there’s also time for the team to relax and bond with each other. Loved Uatu’s explanation of how Reed made the wrong choice in asking for a lab in his honeymoon suite and that Sue’s choice of the Japanese spa was superior. Indeed.

Of course, Bentley decided to drill a hole through the fence to see the naked women and tried to charge his fellow boys. Ahura’s comment about not wanting to see his mom naked was the best and basically summarized why Bentley isn’t the super villain he thinks he is. Of course, now Bentley thinks of himself as man of the house instead. Kid’s gotta have goals, I guess.

Scott’s still a bit angsty to me. Or perhaps I just don’t get why Darla’s still waiting around for him to finally decide that they should try to have a relationship together (or a hookup). Scott would be way over dramatic if Doom hadn’t been the one to kill Cassie.

Loved Onome figuring out the correct answer to the ethical dilemma of cloning Dragon Man. Seems like some of the children may be learning something after all.

Not a huge fan of the parts in Latveria. I’m not a Doom fan, and I haven’t really read a ton of comics with him so I’m not getting all the references. I feel that I actually need to go and read the giant stack of Byrne penned Fantastic Four books I own (when She-Hulk replaced The Thing on the team) to get a lot of the references. Or the ’80s Avengers that I also own.

This battle scene was incredibly well-done. Most creators can’t think of a strategy beyond storm the gates or a reactive fight, and this sort of planning is what makes FF a step above the rest.

I’m super intrigued by the reveal that Ravonna is actually Valeria all grown up. She seems to be some kind of shade of semi-evil, or she’s out for her own well-being anyway. Seems like perhaps it wasn’t Doom that they should’ve been so worried about.

Bentley motivating the other kids to play video games better was pretty cute. Love that Onome has a huge crush of Ahura. Also that Cargo Manshark (whose name seems like something Fraction snagged from his own children’s imagination) plays better than Leech and Artie Maddicks.

It seems that Scott figured that crazy old Johnny would go after Doom without any waiting. I suppose it’s always good to have a character that you can use for cannon fodder. We pretty much know that eventually a younger Johnny will appear and the timeline will be set back correctly.

Disappointed that Doom took out Jen, Darla, and Medusa all at once. Seems like they could’ve put up a bigger fight than that. But, of course, Scott had labeled Doom his perhaps just as much as Johnny. He just seemed less crazy, even if that may not be the true case.