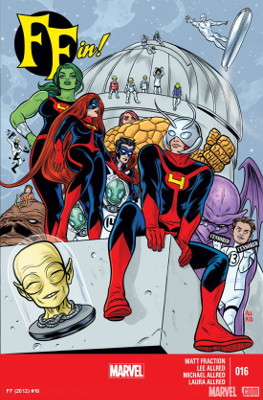 So I was pretty let down by this entire issue as the final one. It made me kind of sad considering that I’ve found this entire series to be pretty fabulous. Instead, the writing seemed to overwhelm the art…in mass. This is a case of how quantity does not make quality. Lee Allred was just too wordy. In fact, it reminded me a lot of the Stan Lee ’60s school of comic book writing. Something that I’d hoped died out by the ’90s.

I found the text so dense to get through that this double issue too me too long to read. Too long in that I noticed how long it took me to read, not that a single issue of a comic book should only be a certain length or take a certain amount of time to read.

I was happy to see that Darla, Medusa, and She-Hulk weren’t really knocked out. Instead, they were able to get back into the action, and their incapacitation served as a decoy.

The Watcher explaining the Pym Particles and how Scott discovered they are more than just size and strength was hella boring and tedious. It slowed down the book. And I didn’t care what happened to Doom. It wasn’t like anyone thought Scott was actually going to kill Doom, even if he really wanted to.

Though now there’s a complete set-up for Cassie to still be alive. In that horrible, they resurrected Buffy, but forgot to dig her up so she had to crawl out of her own grave way.

Yeah, I just don’t care about the Watchers and their ilk. Since they choose not to have any agency, there is no way to connect with them as characters and no one cares about them. They are basically furniture that plays deus ex machina in these stories.

While I’m sad that this series has come to a close, I just can’t see it continuing without Fraction’s wacky mind behind everything.