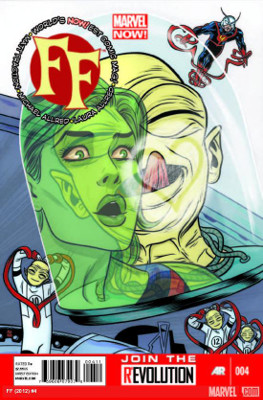 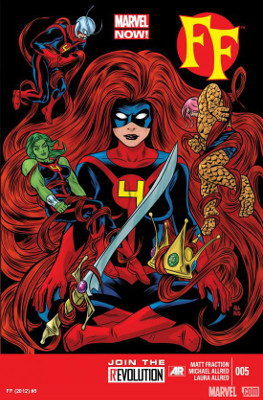 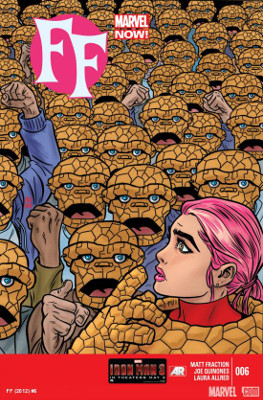 Yep, how could I not love a book where the main part is She-Hulk and Wyatt going out on a date. They are adorable and ridiculous. And you’d think the odd behavior of their waiter or the random weather and light show would ping their Spidey-senses.

Mik’s, Korr’s, Turg’s, and Tong’s crushes on Jen are cute, in that tiny children have innocent crushes way. Of course, these children can do more destruction than good.

While I’ve seen some people thinking Medusa’s gone evil, I think she’s pulling some reverse psychology on Bentley-23. That she’s trying to connect with him on his level. And maybe keeping better tabs on what he’s up to by being on his “side” rather than disciplining him.

Interesting how Medusa keeps being put as the baddie. I’m not entirely convinced that she actually is. Instead, she could be tracking down members of her family. I’m not surprised that she brought her son, Ahura, to the Future Foundation. I liked the interactions with Crystal. Those two together have always been a favorite of mine.

Darla finding her perfect headgear was cute. I loved how they knew she wanted to show off her trademark pink hair.

Scott is incredibly insecure. But I like it. I like it that he’s someone who came back from the dead and is clearly having PTSD issue due to it and Cassie dying.

But there does need to be some adults running the Future Foundation and being in charge of the children.

I was worried that with the change in artists, the style would be so dramatically different that it would change the tone of the book. Quinones has happily proven me wrong. He’s kept a similar, but his own, art style and keeps the fun of the book going.

I love to see the layout of the entire Future Foundation building.

Darla and Scott getting the best of the Yancy Street Gang was pretty classic. I’m so happy to see that Fraction’s also maintaining this fun tone.

I hope that even though She-Hulk and Ahura were missing when the Future Foundation building was zapped to the negative zone doesn’t mean they won’t be involved in the story. Of course, if the story is what the hell is Medusa doing and how to track her down, I suppose Ahura will need to show up again sooner or later.

Figure out just what’s up with Medusa and buy FF Volume 1: Fantastic Faux