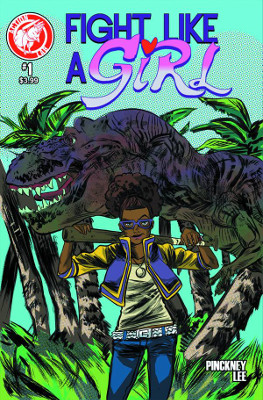 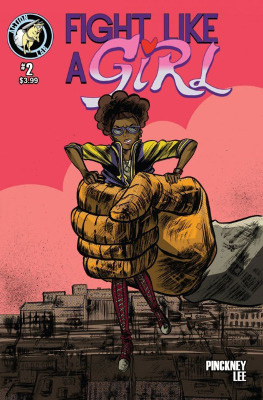 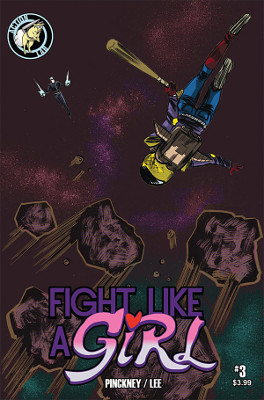 Fight Like a Girl #1 by David Pinckney
Art: Soo Lee

While I wasn’t 100% sold on this book, I do enjoy a lot of things that it’s doing or attempting to do.

It’s a solid hero’s journey. We have Amarosa, our main character, going on a journey to save her brother’s life. (He’s terminally ill, and there’s nothing technology can do for him, so she’s turned toward the gods.) However, the archetype of the hero has been flipped to be a woman, or more accurately a girl, and she’s black.

Of course, the hero’s journey is as much about internal change and reflection as it is about the actual physical adventures. Amarosa’s last line — “I need to figure out who I’m supposed to be… I can do this. I have to.” — reflects both struggles, and her own acknowledgement that she knows the game.

We also have the gods pantheon made of an amalgamation of archetypes. I’m a bit disappointed that most of them I recognized were specifically from Western mythology. I’d expect this to be mixed up a bit more, especially since Amarosa’s nine trials don’t have to be specifically Western-origin ones.

The Announcer’s peppiness definitely gives this a game show feel. I assume this book’s targeted as a tween/teen audience, and it fits with taking the trials into a modern context better. Plus, the Announcer’s a good contrast in mood to Amarosa.

The first trial with the shapeshifter sets up a lot about the future stories and trials. We find out that Amarosa’s nemesis are going to know why she’s there and be able to play on her emotional weaknesses. We also learn that she doesn’t want to kill, and that it’s much easier for her to fight a direct villain or inhuman creature like a snake or t-rex than a human. (I loved Lee’s art when the shapeshifter changed from human woman in bikini to t-rex. Perfect.)

I’m looking forward to seeing how Pinckney turns these archetypes further on their heads.

Fight Like a Girl #2 by David Pinckney
Art: Soo Lee

While I was expecting Amarosa’s brother to be her younger brother, it’s clear that he’s her older brother. Perhaps he helped raise her, and now she’s trying to help him the only way she knows how to. I can’t quite figure out if Kaiden is her boyfriend or just her best friend. Interesting to see the flashbacks to learn more about her family.

Unsurprised to find the twist that the trials are a show for the various gods in heaven.

I’d have to agree with Amarosa that those killer robots bent on humanity’s destruction seemed a bit easy to kill. Though the Announcer did say that humans left Earth for another planet. This trial focused on wits — and set up a scene where the information told Amarosa, she like the other humans would lose — and put her in a lot of physical danger. While it seemed to also say that Amarosa could actually only die at the hands of the person/creature/robot she was fighting since she got the knowledge on how to work the jetpack and went through windows, not walls.

Fight Like a Girl #3 by David Pinckney
Art: Soo Lee

I’m not surprised that there was a battle in space. Seems like a logical place to have a challenge.

Interesting that Pinckney chose to have Kaiden continue to emphasis that he was poor and that a bouquet of flowers cost a lot of money to him. What I’m taking away from that is that Amarosa’s brother might be able to be healed by medicine, but that they can’t afford it. So instead she risks her life fighting (literally) for his. Even if there’s apparently a strong chance that she might not be fast enough to save his life. But good to clear up that Kaiden is Amarosa’s boyfriend.

Support this blog and buy Fight Like A Girl: Learning Curve.