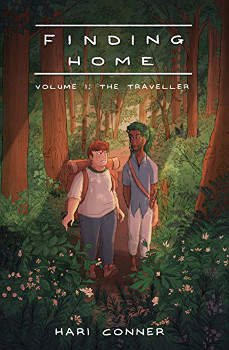 This is one of those books that I’m going to be a sucker for: a slow moving, character-driven queer romance. Yes, I’ll take that anticipating, longing, and need to connect. (Well, as long as Janek and Chepi hook up in the next volume; I’m not made of patience.)

Finding Home is both a metaphor — for Chepi — and literal — for Janek. Chepi is a dryad, who’s traveling through the world’s forests finding medicinal herbal magic, and JaneK is a human chef, who’s just trying to find his way back home.

In this magical world, there are humans and fae, and the fae are second-class citizens, and there’s mentions on an imperial empire that used to rule everything, but at least doesn’t rule everything anymore.

Most of the book focuses on the two characters, their immediate lives, and flashbacks of Chepi’s world before he met Janek. While Janek shares openly about his life, Chepi is more introverted, but the more emotional of the two. Conner’s art shows physical changes in the dryad’s body — namely growing flowers amongst his body hair, which is plant-like — when he’s upset. This was a nice way to express Chepi’s emotions beyond facial expressions or verbally.

Conner’s art in general is beautiful. Their studies in flora and fauna are perfect, as are the expressions on each character’s faces and what makes them unique. I really love that Conner included details like Janek’s birthmark (which he’s shy about) instead of trying to make the characters comic book perfect.

My only one quibble is that the letters Chepi writes to Priya — his human colleague at the university who’s collecting his data and making medicinal, magical cures from it — are sometimes hard to impossible to read fully. I found myself skipping a lot of the words and then going back to fill them in for context.

Connor’s exploration of the half-human, half-dryad Chepi serves to show how someone caught between two worlds might want to escape from everything. Of course, a huge part of it has to do with Chepi getting his heart broken by a human man.

The book starts off with Chepi having some kind of dryad-style emotional breakdown surrounded by his family, and at first, I thought the parts with him and Janek were in the past, and we were seeing a future where he was trying to live without Janek. But after what we learn about why Chepi left on his forest adventures, it seems like it was this other guy who caused Chepi all that pain and that itself was a flashback.

Since this is a magical world, Connor’s use of the scary-creatures-get-two-characters-sharing-a-tent worked well. It felt natural in the book.

The slow burn of Chepi and Janek’s attraction to each other was incredibly well-done. The parts where Janek wonders if Chepi thinks he’s straight was so true to queer dating experience that it made me laugh. I also appreciate Chepi being scared to share his heart with someone again.

Besides some romance in volume two between Chepi and Janek, I hope there’s more about Janek’s life. We’ve learned a lot about Chepi, but haven’t gone as deep with Janek. I’m also curious to learn more about the world, and it’s interactions with their lives.