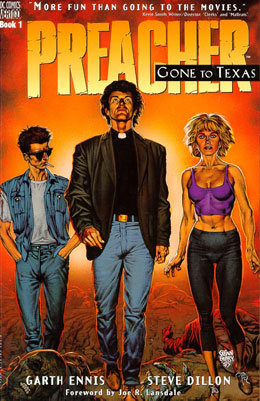 Perhaps this book suffered too much pre-hype for me, because I read it years later after everyone had been ranting and raving about how awesome it was. (I think it’s good to mention this because it colors my review, not because I think it’s wrong to find this book awesome.) Perhaps I read Preacher too late in my own personal reading history to really appreciate it. Don’t get me wrong, I did enjoy Preacher: Gone to Texas. It was entertaining. But when it ended, I didn’t really care if I went out and bought the next volume of it.

I found myself a bit jolted by how the book started off with Jesse, Cassidy, and Tulip in a diner, talking like old friends. I understand why Ennis didn’t want to tell a completely linear story, and how he wanted to jump into the real meat of it right away. However, the old friends is a problem. I assumed they all knew each other for a long-time. Of course, Jesse and Tulip have; they just haven’t seen each other in a good while. But Cassidy is a complete newcomer to them.

This makes me wonder if Ennis didn’t write this scene last. If he’d already been listening to the three build their own dynamic and just went with it. Sure, maybe vampires just jump right into social situations and snark their heads off because well they’re powerful and can eat you. But whatever.

(Side note on Cassidy’s character: Joss Whedon totally ripped off Spike, right? Y/N? Or perhaps Cassidy is everything Spike always wanted to be and never could be.)

I do think Steve Dillion’s art was a wonderful match for this book. His style isn’t my favorite; but it fit here and worked really well. It has enough grit and dirt so you can get into the story. Plus, what I do love about his drawing, are his characters’ eyes. Everyone’s eyes are incredibly expressive. Which I give him major kudos on.

As far as the entire heaven-vs-hell and Genesis plot, I just wasn’t enamored with it. I think I’m over my love of religion in texts by agnostics/atheists/questioning people. A younger me would’ve gobbed it up, especially when I was reading about Lestat’s trip into heaven and hell, The Celestine Prophecy, or guides about finding your past lives. Or for that part, re-reading parts of The Bible. As much as there’s a sweet irony in God giving up and leaving, it doesn’t do much for me as a reader. Though in 1995, I would’ve love it and I have no doubt it was one of the best comics being published at the time.

(Perhaps I should mention that in 1995, I was 12. This comic would be dirty for a 12-year-old. Especially a 12-year-old who would soon be attending a conservative Lutheran school where I was, no joke, lectured on how believing in aliens was against Jesus and asked not to wear my Star Trek: TNG t-shirt to school.)

Nor does the blasphemy of the demon and the angel sleeping together and producing a child, Genesis, titillate me in a way it once would’ve. (And of course, the demon was the woman… Though all the angels so far have been men.) I do like this child being so powerful and the angels being scared of him/it.

However, I have totally guessed the ending. That Genesis is a God. That God is made by the uniting of good and evil together and that’s why S/He’s all-powerful. (After I finish this review, I might go read spoilers just to satisfy my curiosity about being right or not. Unless someone can convince me to give the next trade a try.)

I feel Ennis was too hard on the people of small town Texas. Yes, backwater hicks are just that, backwater hicks. Hugo Root is perhaps the best example of this over-the-topness. Does he have to be a racist and an alcoholic? Does he have to ignore his son and only give him attention to beat him? Does he have to have all the institutionalized power? Does an abused kid from hickville really say the word, “Arse”? (Granted, ass probably would’ve hit the censors as a name of a main character. You know, if we ignore all the rest of the foul language or Hugo fucking himself with his dismembered dick.) Hugo’s entire arch just seemed like a tired stereotype.

The tension of Jesse, Tulip, and Cassidy being on the run, while at the same time it being a non-tension, works really well to set-up this epic road trip to find God. (See, how am I not enamored with a road trip?)

It was in New York when I really started liking Tulip. I realized how much I’d started liking her when I actually cared if she lived or died at Si’s hands. There have been a lot of situations in my life where I’ve been the only woman, so I can sympathize. Not to mention Jesse trying to get her into bed. (Thankfully, he didn’t use his God-Voice there. Otherwise, I’d be yelling.)

The Reaver-Cleaver part felt too contrived. Like the trio seriously just stumble into an active serial killer. Serial killers aren’t that common, and NYC is a huge place. Okay, yes, I know Ennis has to build a plot somewhere and keep the action going.

Cassidy pretending to be a dead body in Si’s basement was really brilliant. Though I completely figured it was going to be Jesse’s God powers which killed Si.

Like I mentioned before, this comic was entertaining. It kept me occupied, and at the end, I did enjoy Tulip and Cassidy. However, I wasn’t enamored or in love. And, at this point, I’m leaning toward not picking up the next volume. Convince me otherwise, interwebs, or convince me to read spoilers to see if I am right.