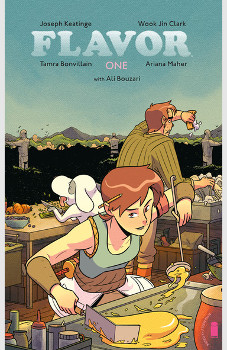 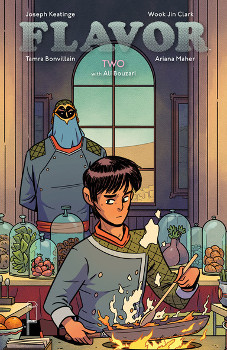 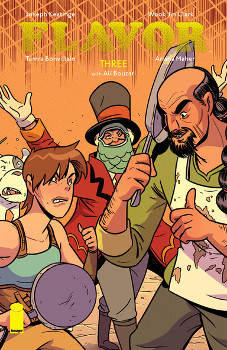 I hesitated picking this up, Keatinge’s Shutter ended up being a big disappointment for me when it came to the plotting and pacing of the series. The book got away from Keatinge in many places. I wasn’t ready to jump into another one of his comics.

Then he wrote a comic book about cooking.

And the first issue was great.

Here we are, friends.

Many, many questions for Keatinge and Clark to answer.

I’m also curious to see how Bouzari’s culinary consulting fits into the book.

Unfortunately, we’re at issue #2, and it’s already not as charming as issue #1. This issue felt like a lot of telling, instead of some showing. The issue starts off with the “last time on Flavor” recap telling us that the reason Xoo needs those truffles is due to their healing powers associated with her parents’ illness. (And here I was hoping to have a more interesting dialog about how to value everyone in society, even people who are disabled.)

Then we are basically told that Uncle Geof has some superpowers or something. At least, when his shirt is ripped off in a bar fight, the “blue collar” guy immediately seeks deference to him in the way that people are extra nice to military personnel and veterans when they are in uniform.

And Anant may lead Xoo to understand what’s on the other side of the wall.

Like other Keatinge books, the world building leaves lots of questions, but the reveals are already happening too much on the telling, less on the showing, and full of lots of promise, but little follow through.

I guess I should’ve seen it coming that this fight ring would be a culinary one. I do like the twist that by hands, they weren’t going to kill the other chef, just make him work as a servant for the other guy. You know, enslavement over death.

I didn’t know what crêpes suzettes were — but looking them up, the recipe does sound very tricky and like it would make a good competition or test. Though I do hope we’ll see not just French cooking as this book moves forward.

The juxtaposition between Anant and Xoo making the crêpes worked well. It was a nice flow between Keatinge’s writing and Clark’s art.

The barker in the fishhead was suspicious from the beginning. He certainly appears to be incredibly dishonest in all things. And not just because he ends up selling out Xoo to keep his own freedom.

The other chef was kind of a nice guy. It was good to see an adult interacting with Xoo who respected her skills and treated her like a person. There’s still much to be learned about how this world functions and what social contracts are between citizens.