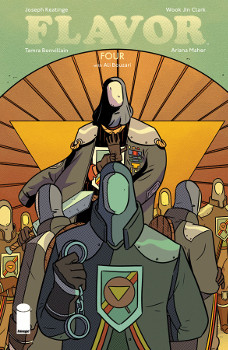 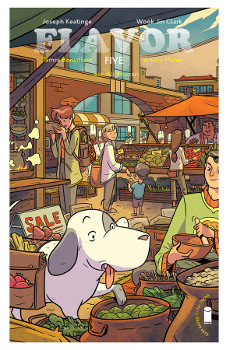 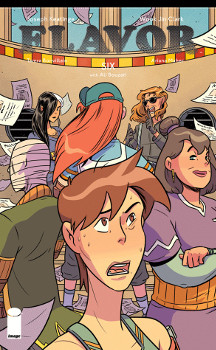 There’s some world-building here that I don’t think is earned yet. I do not understand how much anything in this universe costs. We’re to understand that Xoo cannot afford the truffles to heal her parents. However, here the culinary competition Uncle Geof enters her in costs $2,000,000 in fees, and that’s about how much Xoo had in the till from their illegal restaurant endeavors.

However, I think Geof’s motivations are around getting Xoo into some academy status like Anant, or legal chef status.

Speaking of world-building, the prison wasn’t quite there for me. It was apparent that one of the soldiers-police knew Xoo, and they won’t be feeding her to whatever’s in that forest. I didn’t expect it would be Anant’s mom though. However, the reveal didn’t feel like a big surprise.

I wish Anant had some more emotional development. He seems like a highly-wasted character, especially since he’s supposed to have this great emotional connection to Xoo. Though she’s for sure a better cook than him.

I never thought I’d walk away from a Keatinge comic book thinking that he could’ve been a little more subtle about anything. My experience with his books is so much is written between the pages and happens off-screen.

It was pretty clear from Anant’s mom’s behavior that is something tremendously awful about winning the Tournament. I assume that Xoo will win it, and we will quickly find out what’s actually going on. And Anant won’t be far behind her.

I’m glad Geof gets yelled at by the others. But I’m still unclear at why Xoo’s parents won’t be more involved in this conversation. This book is poorly balanced when it comes to them being disabled/ill and then acting like they are dead. Geof is very impulsive, and given Xoo’s similar impulsivity, this may not be a good mix.

The contrast between Anant’s wealth allowing him to be at the Academy and the already privileged students getting to enter the Tournament for free with Xoo having to pay every last penny of her family’s savings was well done. (Though I still don’t know why we couldn’t spend that money on a cure for her parents directly.) This classism felt so real.

Looking forward to seeing all the tasty food Clark will be drawing in the next issue. Let’s get on with the show.

While I understand this book moving to trade format instead of single issues for financial reasons, it’s frustrating that Keatinge would choose to end it here, not even at a cliff hanger, but some initial setup. Like the kind that you just might read the Wikipedia page in a few years, or forget there was a mystery in the book.

So hairy, person-sized monsters on the other side of the wall?

And the mom is getting sicker? At least we didn’t act like the parents were already dead this issue.

Of course, there’s more classism in this society. The city seems somehow based on New York City with those underground kitchens. I think the “grab the ingredients from the pile” and then make something also seems like NYC-based cooking reality TV shows.

Too bad Buster didn’t stay behind to help run the family restaurant and make some money for the family to live off, because I’m pretty sure the dog can cook better than Geof.

Will I pick this up whenever it may reappear in trade? Unlikely.