Look what I found! Some reviews I did of Free Comic Book Day 2011.

Comic book reviews for Dark Crystal: Preview / Mouse Guard: The Tale of the Wise Weaver (4 stars) and Geronimo Stilton and the Smurfs (2.5 stars) 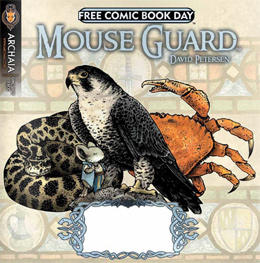 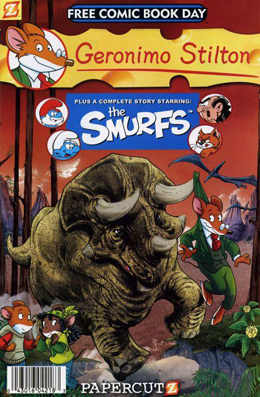 Mouse Guard: The Tale of the Wise Weaver
by David Petersen

I love adore Mouse Guard, and this issue was no exception. Petersen’s art is as beautiful as ever, and his tale is just as clever.

The fable of the Weaver Mouse, and how he defeated the crab, hawk, and snake in order to get safe passage for his townspeople was very well done. I loved it in the frame of a story told to a young Kenzie by his father.

What makes Mouse Guard such a wonderful book for children isn’t that we’re just rooting for the underdog — the tiny, adorable mice — but that the mice don’t just fight, they fight with their wits and cleverness because the other animals are so much larger than them. They also have a real reason of survival to fight.

How the Weaver Mouse defeats the hawk, crab, and snake goes right to heart of what Mouse Guard is really about.

I didn’t feel like issue really grabbed me the way that it should’ve. I think the overall problem is that there’s too much exposition and not enough storytelling. The narrative voice is far too strong. It really overpowers the characters. I felt like I was being talked at, not reading.

The story of Aughra and her son Raunip isn’t as interesting as they should be. I do think that looking at the Gelflings from a negative way, or that they’re too naive to deserve the protection from Aughra that they’ve been getting, is an interesting angle.

The story itself doesn’t make me want to pick up this series when it debuts.

That said, Sheikman and John’s art is wonderful. It’s really the saving grace of the entire issue. It’s beautiful like a painting, and it soars much higher than the writing.

I wonder if the translation was just off, but Geronimo Stilton was a little boring. I’m not sure if it would hold the interest of young children. The plot was slow, and I didn’t want to keep reading. And I’m someone who read children’s comics too.

The Smurfs are just as cute as ever. I have to say that I’m so glad that the comic book is in their universe instead of this new movie where they’re in NYC. What the hell?

Yes, the Smurf submarine might not be the smartest invention ever. But they certainly foiled Gargamel.