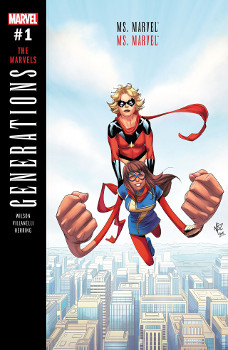 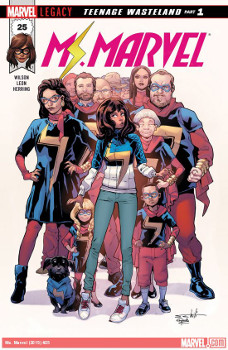 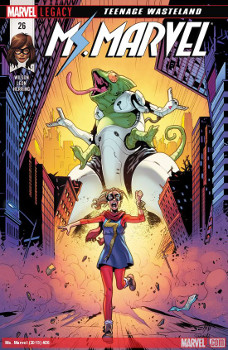 The book leans into the history, into the first Ms. Marvel run from the 1970s. It keeps it grounded. But also a bit safe in its echoes of the past. I’ve read the first couple issues of the original Ms. Marvel comics, and this would fit right in.

Keeping the narrative from Kamala’s point-of-view also keeps it safe. Then Wilson doesn’t really need to rewrite Carol’s history or dig into her viewpoint about her new intern.

It is interesting to have Kamala save Carol, both with Barbara and with Woman magazine. Obviously, Kamala’s going to be a hero, since it’s from her point-of-view and that’s the story Wilson’s been telling since the beginning. However, I can’t help but think of how many women of color have saved the day without proper credit. In the 1970s, it might’ve been unlikely for Kamala to have her (secret identity) name on the article and the magazine’s cover.

I thought the fighting was over-the-top. It felt similarly paced to those older comic books, which I often find the fight scenes the worst part of them.

Villanelli’s styles were point on for 1970s. Carol’s feathered hair was hilarious. It made Barbara’s Shi’ar hair a little less ridiculous.

I have to agree with Naftali that her friends seem to have given up too easily in the search for Kamala. It seems like some kind of Avengers or Inhumans place would be where she’s at. I don’t just see her holed up in her bedroom. Though getting out of not just superheroing, but also going to school is a lot.

I am surprised we didn’t see Kareem at school.

Is everyone now going to finally put two-and-two together that Kamala is Ms. Marvel? They both mysterious disappear at the same time!

Mike and Zoe pretending to be Ms. Marvel was cute. Leon’s detail of the price tag on the wig was a great touch. Of course, Nakia acts like she doesn’t want to be part of everything, but is, and Gabe is “just providing the space.” Some disinterested brother-in-law.

The upcoming baby has to bring Kamala back. Especially since her brother seems to be counting on her being there to help with the childcare.

Wilson again does such a great job showing cultural differences in elderly assisted living homes versus your older relatives living with you. It is much more of a different mindset than access to money and the ability to pay someone else to care for your family members — which is what I assume the first iterations of old people’s home were about. That and medical care required beyond what those who aren’t trained can do.

Going back to Kamala’s first villain, the Inventor, was a nice touch. I love all her friends in their Ms. Marvel costumes so much. They are just the best. Same with Kareem calling them out about not covering their amateur superhero tracks.

Apparently, Naftali’s Uncle Aaron is going to be the one to figure out that Kamala is Ms. Marvel. All that embiggening demands so many calories.

Though I do have to complain how the universe shows us elders like Uncle Aaron with words of wisdom, but not all of us have uncles like that, and I kind of get sad for myself sometimes. I had 5 uncles, and none of them ever had/have words of wisdom to listen to.

Zoe and Harold may be the best team-up. It brings the Greatest Generation and Generation Z together at last. She’s scared of spiders, and he’ll survive a tumble down the stairs due to his titanium hip. Zoe understands how to use Snapchat and he knows how to punch a Nazi. This is their wacky private eye sitcom.

Leon does an incredible close-up on Nakia’s face. And I kind of want more of that.