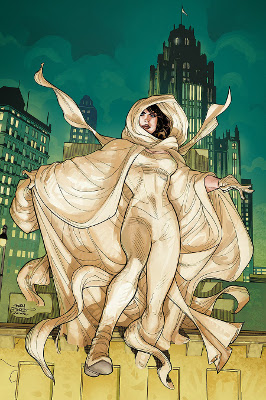 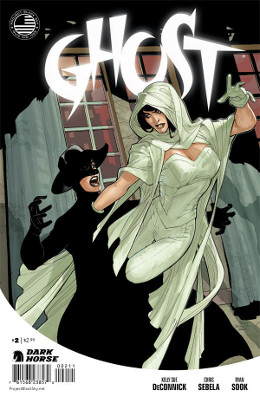 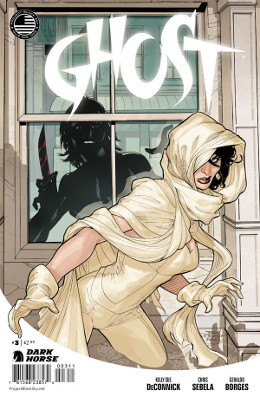 I’m glad that this book is back. The mini left a lot of stones unturned. Elisa is a great character, and I love how determined she is, not only to send the demons back to hell, but to also solve the mystery of who she was and what she is now. And I love that they gave version 2.0 of her costume pants.

It’s not surprising to see that Elisa takes James Barrow’s death pretty hard. It may be hard for them to figure out who the demons are and work to send them back, but when the human host lives, at the end of the day, the mission seems righteous. I imagine that there might be some hiccups if the demons have been in the bodies for a long time or they’re older people’s bodies.

Sloane’s addition to the cast is great. There was need for another woman, and I like her egging on Vaughan. It’s also amusing just how nonchalant she is about everything.

I was surprised to see Elisa strike a deal with that demon. Though I’m not entirely sure she’ll keep the end of her bargain about getting him a fresh body to posses. That said, Elisa is very determined to figure out who she is and this demon seemingly has the answers. Or at least knows which carrots to dangle in front of her.

I like this human exploration of Elisa. She’s definitely not thinking entirely rationally about dealing with Beleth. Or more in making any deals with him for a human host if he provides her information on Doctor October.

Yes, this entire thing was very much a trap. Good thing that Ghost is basically invulnerable. Also good for October that she has so many random demons for cannon fodder. I will be interested to see how everything unfolds and perhaps a glimpse into what the Mayor’s plans were.

Sloane and Tommy are definitely getting themselves into trouble by attracting the White City Butcher. Also I felt that there was a meme in there either about keeping your car cleaner or about looking in the backseat for serial killer stowaways. Like a fake internet meme my grandma would send me 10 years ago.

Vaughn just really won’t give up trying to win Caroline’s affections. I mean, sure he wasn’t crazy like she thought, but she probably needs some time to heal from dating the Mayor and it wasn’t like she and Vaughn didn’t break up beforehand.

I hope that they can find a consistent artist. I think I’m missing Noto’s work on the series from the mini. Elisa seems very solid under Borges and a bit less ethereal.

I did feel there were a few too many plots going on. The characters were essentially broken into pairs and then Elisa had to save everyone everywhere. Not surprising that in the end Beleth may have gotten his bargain, but not in the way he expected. Though Elisa may regret getting him locked up considering that he too wanted to go after October and the Mayor.

I’m glad that Sloane’s serial killer plot wrapped up quickly. Tommy being knocked out and Sloane taking him on herself was perfect.

Caroline seems to be turning into my favorite character. I love how much Vaughn wants to protect her, but then she tells him off.

Elisa’s ability to hide a body is pretty convenient, especially since she’ll probably be killing some more demons. Though I don’t know how anyone didn’t notice the giant demons fighting on a busy bridge.