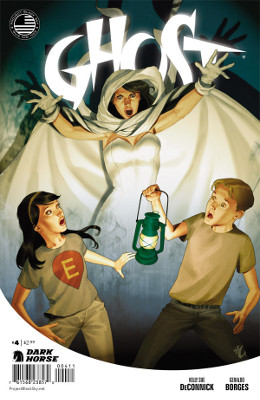 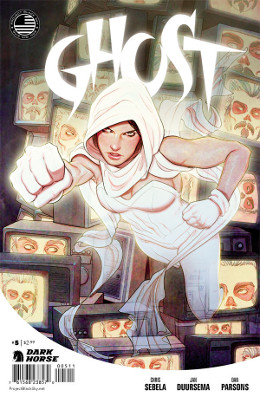 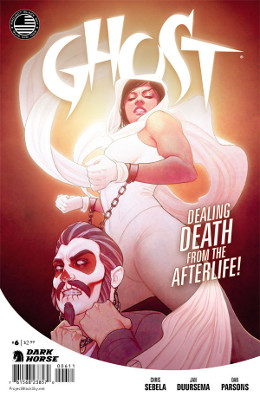 DeConnick really outdid herself in this last issue written by her. (For now anyway.) It’s the perfect revenge fantasy with Elisa, both as she is now and as a child.

The current timeline has the crew speculating on what they’re going to do next. It frames the story to become more a detective and crime book, instead of just chasing down the various demons that have been coming through portals. Though I imagine that will happen too. This leaves the next writer open to take the story in multiple directions and not so tied to one mission.

The story around Elisa features her tracking down some men who’ve been killing prostitutes. Sex workers, of course, are a marginalized group of people in the US. And Elisa as Ghost serves as their protector. She finds the young men responsible while working undercover. She calls the police once she has them tied to a bed with the words “coward” and “sadist” carved by her into their chests. It’s left up to the reader to decide if the men are dead or alive as they’re drawn in an ambiguous way.

The story of Elisa as a child is basically how she grew up. It starts off an innocent narrative of her becoming the leader of the childhood friends after Hadley Conrad disappears. The story’s told from James Barrow’s point-of-view to give more light to a character we only met as a demon. And also give Elisa’s new friends some history on her. There’s some childhood romance and superheroic ambitions in play.

But the real story is Elisa finding Hadley’s dead body and knowing Hadley’s father killed her. It’s Elisa who insists on staying with Hadley, insists on not leaving her friend who she couldn’t be there for in her moment of need. While James alerts the adults, Hadley’s father comes back and Elisa gets her first revenge for her friend and protection for herself. Surely if he killed his own daughter, he wouldn’t hesitate to get rid of another body. But Elisa knocks him out before he can hurt her.

Not only as these revenge fantasies. These are both revenge fantasies of women, which is a particular lacking narrative in stories about women. (Well, unless you could a woman “getting her man” due to revenge or Fatal Attraction-style stories, which I don’t.) Thank you, DeConnick, for pushing these boundaries.

I think that there’s going to be some adjusting to the new team on Ghost for me. It just felt a bit different in tone. And also I’m super scared of clowns, so Von Ghastly was just gross and scary. I just wanted Elisa to kill him.

Duursema’s lines seem thicker, and the art style reminds me more of Preacher and other gritty comics from 15-20 years ago. While I appreciate all the details and the backgrounds, sometimes I don’t know where to look. I’m not sure if that’s Duursema or the inker/colorist choices.

Clearly, Tommy’s going to get himself into some trouble next issue. He should really know better than to engage with demons.

I am enjoying Sloane a lot. Vaughan as the adult is pretty funny too. Elisa, on the other hand, feels a lot more “lost” than she previously had. I’d felt she’d come more to terms with her new life in that first miniseries than she seems here.

I find Sebela’s putting science into the universe very interesting. I like that this Von Ghastly guy is just some human dude, who’s trying to rule some kind of dimension through some dark arts and modern technology. After all, one person’s magic is another person’s technology.

Von Ghastly is still gross. Not sure what I feel about Elisa having to be, in part, saved by Tommy. I guess she did sprain her hand in order to get out of those cuffs.

Not sure why Elisa doesn’t see her stalker behind her? Or why they aren’t making some plan to actually stop Von Ghastly, even if he’s clearly moved his headquarters? He would probably have to keep broadcasting in order to keep gaining new minions for sacrificing them. You know, the numbers problem of killing your followers…

Take some demons out with Ghost and buy Ghost Volume 3