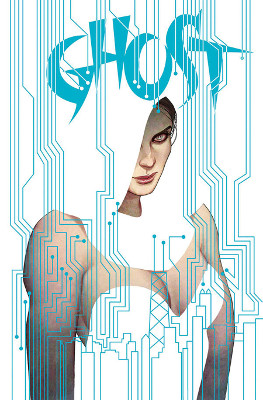 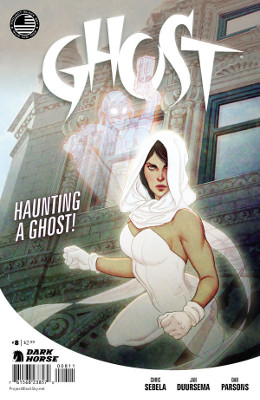 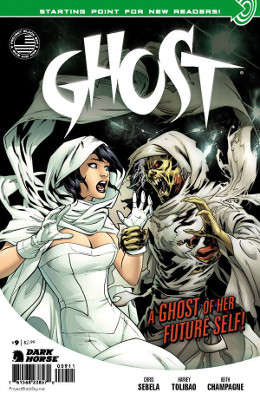 Ugh. Let’s talk about that last panel. Why is Elisa bent like that? Why is all I see is her boobs? This is really gross, Duursema.

There are a few too many stakes in this plot. I would’ve rather had her take down Von Ghastly and then find this guy with his technology to hide from her and touch her.

Not really getting this secret underground and behind some subway tracks flea market that Tommy somehow wandered into. This doesn’t seem like something he should’ve found on his own. Okay, he was a ghost hunter looking for fame. Tommy was the one who originally had Ghost’s box.

I don’t know, this just felt like it was putting odd, plot-shaped pieces together that really didn’t match each other.

I started off this issue thinking that I was going to cancel after issue #9. However, by the end of it, I was a bit more amenable to where the plot seems to be going.

Two things have really been bothering me about this arc: 1) Von Ghastly as a character, who resembles a clown. I hate them. 2) Duursema’s drawings of Ghost in her costume. Seriously, dude, tits don’t work like that. Ghost would be falling out of her costume. Or a least having nipple exposure.

I love that crunching the box has brought Elisa back. Or maybe learning how to “banish” Elisa from her mind, has then brought the flood. I’m hoping for more bonding with the other characters. Though emo Vaughan is just emo and an alcoholic and that was so 10 years ago.

This comic seems to be back in form. Mostly, it seems to be back to where Kelly Sue DeConnick left off, even after a slight detour somewhere else. Elisa with a mission to clean up the city, Elisa saving women from harm.

While I don’t doubt there’s another consciousness or knowledge in her head, Elisa is blaming the Ghost part of her existence on some actions it seems like she won’t be able to live with. Vaughan was correct that fighting real humans is different than demons. Even if most of those demons were wearing human skin.

Though I don’t know why the gang continues to put up with Vaughan’s drinking. Caroline has a better idea in leaving him alone. Clearly, Vaughan’s also up to something on his own.

It would be pretty easy for those crime bosses to make the connection to Tommy if he’s the one filming everything. Even Peter Parker was more careful than Tommy about exposure.