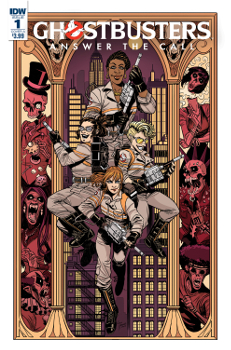 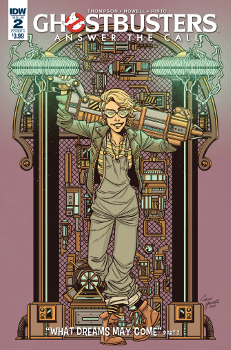 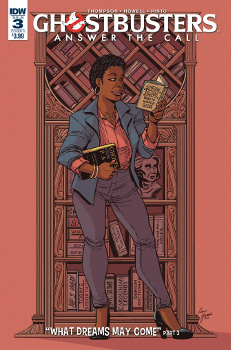 I’m an unabashed fan of the lastest Ghostbusters movie. Yes, the one with the ladies. I did not read the previous Ghostbusters comic, which seems like it tried to hand off the mantel Ghostbusters to Ghostbusters.

Even though there’s a lampshade put on it, it seems a bit repetitive from the movie to have Abby immediately possessed by another spirit. At least with this one, they quickly get it out of her.

We shall see how this ghost mystery unfolds. I’m not entirely bought into this villain as an interesting one. It seems Thompson went for pure evil over nuance.

I do appreciate how Thompson is focusing more on Patty’s brains and her historical knowledge, even referring to her as a historian of New York City’s past and architecture. One of the rightful criticisms of the movie was Patty as a metro worker, instead of a scientist in her own right. (All the original Ghostbusters were scientists.) Patty seems to be really driving the entire team forward.

Holtzmann’s joke seemed a little off-kilter and not quite fitting for the character. I hope she gets zanier. And Erin seems to be the weakest character with mostly her crush on Kevin featured. I did really enjoy Howell’s pencils on Kevin and how he looks like a great caricature of Chris Hemsworth.

It was a few days between when I read this issue and reviewed it, and I basically forgot everything that happened inside. Which is never a good sign about how the series is going.

There was definitely time in this issue to delve into who these women are beyond what we learned about them in the movie. However, each of their nightmares doesn’t give any light into them. I hate clowns too. But this isn’t tell me anymore about these ladies.

Comics can be a way to show more off a universe and push things that you couldn’t do in the movies. (Granted, the movie had a giant budget.) Instead, this feels short, stunted, and without a lot more characterization.

The art is fine. It, like the story, doesn’t push the narrative further.

Took three issues, but finally these women are breaking through this book and becoming more themselves in an expansion on what we learned about them in the film. I can’t say I’m surprised that Holtzmann and her revelation around Erin’s fear of bees is what turns it around.

I also loved Patty digging into the diaries of the bad guy and being engrossed in both the history and solving their mystery. It was a great use of her character, and perhaps even better than the film did to her.

The mellow break-in and ghost hunting without Holtzmann felt right. It gave the tone of the book, a little bit of a break from the all the chaos, and only had one element of chaos: the actual ghosts.

The shtick about Kevin and the numerous phone cords he’s cut to make them stop ringing was pretty great. Of course, Erin hadn’t noticed, and of course, the others had ordered more phones to have on hand.

The mayor calling them to solve their issue was a nice nod to the movie, and shows a bit of their standing in NYC currently.