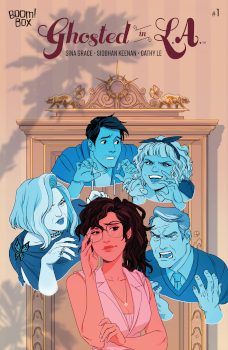 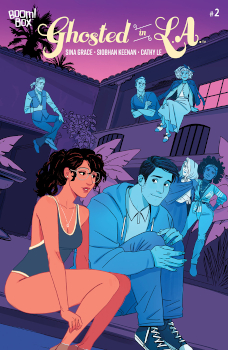 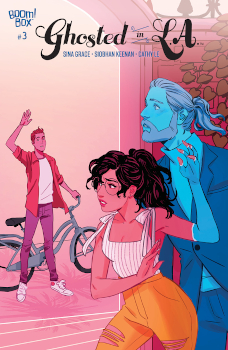 We’ve all met people like Daphne, who structure their entire personalities — including likes, dislikes, and where they go to college — around the stronger figures in their lives, whether lovers, friends, or family. Here Daphne follows her boyfriend Ronnie to college from Missoula, Montana, to LA. Her best friend Kristi calls Daphne out on it, but they have words and a falling out over it, just as Daphne transitions her life across the country.

I do wonder if people, who aren’t from the US, realize how big of a life change it would be to move from Missoula to LA. Because wow, especially as your support system falls out from under you. Demographics wise, Missoula is 73,000 people spread over 29 miles compared to Los Angeles with 4 million people.

It wasn’t surprising that Ronnie immediately dumps Daphne. He’s gotta find himself. Which again, I also don’t blame Ronnie for the feeling due to the cultural change — though it’s a shitty thing for him to do, and he’s still the worst.

Michelle, the lousy fit roommate, cracks me up, and this felt too true to dorm life. Her watching queer romance and then hosting Bible study in their shared room was just brilliant. Also, Daphne cracking that joke about her being Jewish. (That said, given she grew up in Missoula, Daphne should be used to dealing with that type of Christian.)

I’m mixed on how I feel about the haunted mansion that’s hidden from others. No doubt, Daphne can see it because of how she’s feeling inside. I do love the text message she finally sends Kristi at the end of the comic, especially compared to the unsent drafts we see.

Agi seems to be 100% based on Catherine O’Hara and her character in Schitt’s Creek, but I’m digging it. I’m not quite sure what to make of the other ghosts. No doubt, we’ll find out more about them especially since it’s unclear why they are all at this particular mansion.

On the cover, Ronnie is one of the ghosts, which is odd. I mean, sure he dumps Daphne, but he doesn’t even ghost her.

The art is, in general, pretty great in meeting the story. I’m curious to see how it will evolve and grow. Daphne’s outfits have been pretty cute, and there’s an anime influence but is its own style.

Honestly, I found this issue a little confusing. It seems that Grace has an idea of who all these ghosts are, what their backstories are, and why they are hanging out at this mansion. However, there are not enough substantial clues or insights to make it not just seem like a lot of characters we’re trying to get to know.

So much so that I confused Ricky’s ghost with Ronnie — both look a lot alike, and both have R names — on the first cover. And then I was like “who is this new ghost?”

The flashback with Agi buying Rycroft Manor was well-done. It was clear that Agi didn’t have many good friends (and wasn’t too kind to her assistant), which means that perhaps this ghost curse (or whatever’s happening) has to do with her desire for friends to spend an eternity with her. But Agi’s not the oldest ghost there.

Brint is the worst, and Daphne, like many women attracted to men, spends way too much of this issue trying to impress a jerk. Of course, Brint cannot take no for an answer. He is that guy. And Ronnie showing up that the end! Shaking my head here. These guys know that Daphne is the type of person they can take advantage of this way.

Of course, in her focus on boys, Daphne doesn’t take care of those around her. The ghosts are already mad at her for Brint, and they are going to be less pleased with Ronnie showing up. Her not bringing Ricky back a record from the band she saw is going to have consequences.

Maybe this book is all about both Daphne’s need to discover herself, but also needing to be a better friend by being herself, not by trying to be the people she’s around.

I’m still unsure what the plot of this book is supposed to be, but this issue did have a lot of heart in it. I loved the opening story about Bernard and how closeted he was before his death. Then how he picks up on something about Ronnie and encourages Daphne not to brush her ex off.

If the ghosts are helping Daphne connect with people in her life, somehow, I don’t think they’re going to make her relationship with Michelle better. Since Daphne has a better place to stay, she and her roommate have the least amount of contact possible. Though they may have a major in common if they are both in the art museum together.

Maurice has some poltergeist powers, and I have a feeling we’ll be discovering more about him in the next issue. Interesting how he says Agi takes in lost souls when the bit we get of her human didn’t seem like she had any friends.