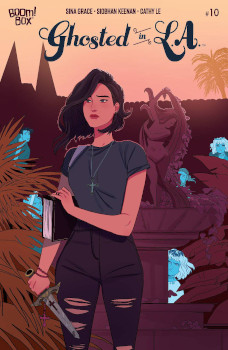 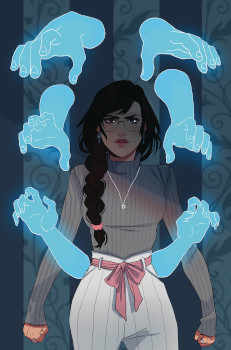 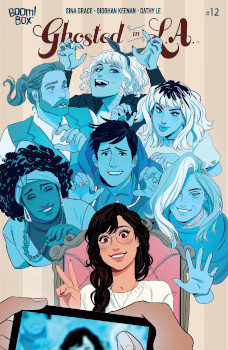 This issue suffers from Grace being both the writer and the artist in that there’s no enough time to really build out the art. I’m actually surprised they aren’t reusing backgrounds since most of this issue is at the manor.

Pam should feel bad for not paying more attention. She may have died as a child, but she’s lived as a ghost many human lifetimes. Sure, Agi pushes people away and is all about taking care of things herself to hide secrets.

Michelle is becoming a vampire hunter. She needs to watch and read more media about ghosts. (Since I’m mostly too scared to watch ghost movies, my entire ghost movie oeuvre is all about Ghostbusters and Crimson Peak.)

Besides the realization that Agi is trapped, not too much happens in this issue, and it seems like way too much set up for a series that’s ending at issue #12.

Perhaps a bit predictable. Of course, human Agi would’ve bound a ghost in the basement of the house, and that’s what kept them all tied there, plus drew new ghosts to the manor.

I don’t know what they’re going to do with Michelle. There’s something wrong with her, but I’m not sure Daphne calling her crazy quit pins it. However, she did try to attack Daphne with the knife. It was rather convenient that Michelle hurt Zola just enough to discover that the knife could affect ghosts.

I suppose since the ghosts can now leave the manor — and Agi is no longer there to lead them — this will leave Daphne and Ronnie to be free of this responsibility. Though Daphne has also basically been living there, and it’s not like she will want to go back to being roomies with Michelle.

Daphne’s personal growth has slowed a lot in this second half, and I’m curious what the final issue will say about her future. Or how these ghosts should or could be her family.

The ending was cute. I was pleased with the Daphne characterization and showing how she’s grown up. Not lying to the landlord to get Rycroft Manor signed over to her was a big move.

(I’ll ignore how I don’t quite understand how an unemployed college student will be able to pay the property taxes, even if there’s no mortgage left to pay. I guess they have those extra rooms to rent.)

The next big step was Daphne doing something for herself. Living full-time at Rycroft was one, but the other was getting into the animation program. Not only did she get into the program, but she also put together her animation project. Since Daphne neglected a lot of her schooling, honestly, I wouldn’t have been surprised if she dropped out. But I’m happy to see she’s found a major that calls to her, and she’s not becoming a premed student because her mom wanted her to.

Ronnie and Bernard’s conversation was great. It was very queer, and the types of conversations you have to have when your community is small, and you will run into (or live with or become better friends with) your ex.

I do wonder how they will balance having more humans around.

Zola and Daphne’s relationship is cute. Zola wrapping up with Michelle was sweet. But I also wanted Daphne to share about Zola and her with Ronnie. Her ending phone call with Kristi was a nice callback to what started the comic.

Overall, this book was a cute and fun read. Entertaining and sweet, it played nicely with the ideas of what it means to truly live your life (or your unlife) and become your own person.