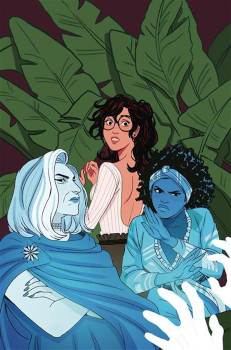 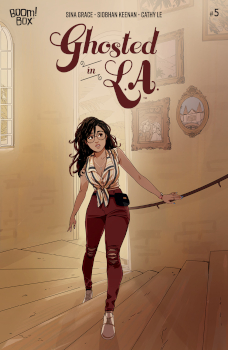 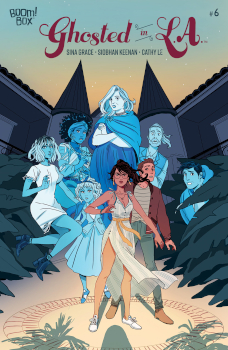 Well, I didn’t see Agi vanquishing Maurice, but I kind of hope that his poltergeist behavior was Grace telling us that your behavior and attitudes in your living life are what determine your ghostly ways once dead. Though I’m surprised Agi let him stay that long. Did she pull Daphne there to kill her? Is there some truth hidden in Maurice’s words?

At least Daphne remembered about Ricky’s record request this time, while on her other mission for Agi. Who indeed is Boyd? This did make me wonder how many issues Grace has planned for this series.

With Zola, perhaps we’ll find out how ghosts appear in the mansion.

Boyd is Shirley’s son, and if I had to guess, I’d say that they died together, and only Shirley came back as a ghost. Though I’m not sure where her questions to Agi are leading.

Zola is growing on me. Not a big fan that she killed herself. Or that ghosts apparently cannot change clothing! You better like what you die in.

The art and motions of Zola and Daphne in the guitar scene where pretty sapphic. I can get aboard with this ship, especially if they’re going to go about exploring the mansion together.

Agi annoys Daphne by sending her on a plant finding missions, and I am amused. Agi must love that houseplants are back in style.

Oh, Bernard and Ronnie! On the one hand, Bernard is too old for him, and on the other hand, it’s probably a bad idea to date a ghost. But at least Bernard can leave the manor. It would make their dates very boring if they could never go anywhere. (Also, you’d think Bernard would be turned off by the piles of dirty clothing, but I guess ghosts don’t have to worry about getting dirty or germs.)

Kristi’s interactions with Michelle were hilarious, especially when it went from ‘omg did you take my place’ to ‘let’s just get the information and leave.’

The flashbacks to Kristi post-fight, and her conversation with her mother was great. I love that Grace explores Kristi’s and Daphne’s cultural differences and how Kristi’s mom’s point-of-view of Kristi and Daphne’s friendship is very different from either young woman’s.

Ricky’s also picking up on these sapphic vibes between Daphne and Zola. For a while, I thought Ricky might be the one crushing on Daphne. It seems like what we’ve seen of Daphne she’s possibly bisexual but doesn’t quite understand her feelings toward women.

Ouch, this friend breakup. Kristi wants Daphne to grow into her own person — which is what she’s been doing since she got to Los Angeles — but Kristi also wants Daphne to be the person she imagines.

Yay for The Bechdel Cast. It’s kind of cute how Grace always recommends things to do and see in LA in every issue. It was fun to see Kristi and Daphne run around the city before things got tense. And Kristi mentions how her family won’t give up on her, echoing her mother’s words from the flashback last issue.

I’m curious to learn what Zola’s powers mean for her and what’s behind that door. Agi knows, but she’s not sharing. Also, Bernard should be able to get to it.

I like that Ronnie and Daphne are now better friends since Ronnie told her his truth.