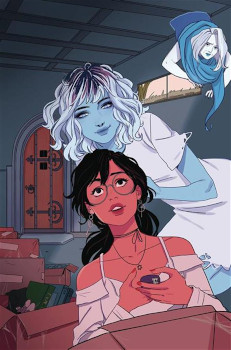 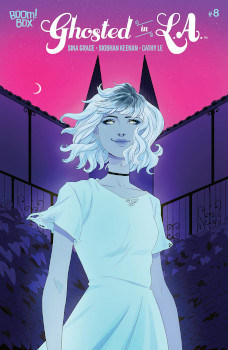 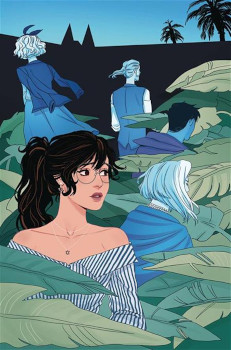 We find out in this issue that Zola did not kill herself, instead she accidentally overdosed. I’m not entirely sure how I feel about this twist. However, it would explain why she cannot move on. Not only does she have the unfinished business of her death, but also unraveled threads about this young woman she was seeing and not being out of the closet. I did like the hard-line mothering Agi did with her.

This roomie Michelle is going to be a problem. I don’t know how much I believe that a roomie who didn’t like you would follow you around or be very interested in your business. Especially at a bigger school in a large city. There’s a lot of other stuff to focus on beyond going to the actual school.

Ronnie’s shift away from the ghosts is interesting, especially in light of his relationship. He is right that he and Daphne need outside connections with living people. That said, Daphne seems correct about pursuing the history of this building.

What does Shirley moving on mean? She’s also the only black character in this book.

And we still have the mystery of what’s in the basement. I suspect that Zola’s emerging powers might help with getting into this room.

Le’s colors were very powerful to show the different eras and moods in this issue. Very well done for all those transitions.

This issue makes it even more clear that Zola wants to be more than friends with Daphne. She’s overprotective of her as a girlfriend would be. What I do like is how Grace gives Zola some young person’s arrogance and her real experience with accidentally dying. Unlike how everyone thinks she killed herself.

Not sure what I think about Agi using Daphne’s body. It felt anti-climatic, given how suspicious Zola was of the whole thing. Though scary that Daphne found her consciousness inside nowhere.

The spell didn’t work for Shirley to move on. And it seems like Bernard also might want to move on himself. I bet all this has something to do with what’s in the basement.

Overall, this issue didn’t do anything to move the narrative and take us to the next place with these characters and this story. The Ronnie and Daphne conflict seemed to have slowed down, and it seemed like there was a missed conversation over breaking up between Ronnie and Bernard.

So Michelle fancies herself some kind of god-warrior. I do appreciate that Grace makes it all about Michelle’s issues. So much of our bad interactions with others — or other’s dislike of us — has nothing to do with us and everything to do with them. Michelle sees herself as a burden to everyone, even God, so she’s trying to prove that she’s not.

Shirley teaching Daphne to bake was sweet. And that’s a useful skill for life.

Not sure how I feel about Zola and Daphne possibly having some kind of romance. We’ve been down this road with Bernard and Ronnie, and that seemed to have landed in a place that said the living need to have their lives. I don’t like how jealous Ricky is of Zola and Daphne.

That said, Bernard making fun of Florian’s name was pretty cute. I guess it seemed less rooted in some toxic behaviors, and more like a reaction to your ex’s new squeeze.

Michelle’s warrior of god stuff is going to come to a terrible end for everyone. Maybe Shirley will get her final rest. For sure, Agi is now trapped behind that door of her own making.