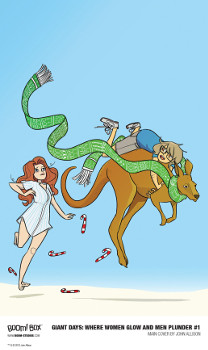 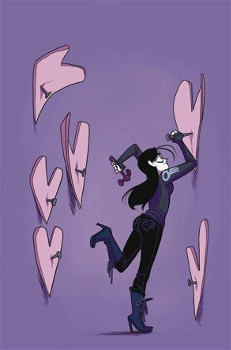 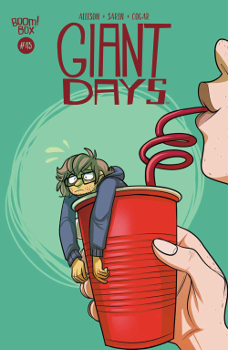 Ed definitely got in over his head with his trip to Australia to visit his girlfriend Nina and her family over winter break. However, this wasn’t quite what I was expecting when it came to her family, which was a nice relief. I kind of expected Ed to become basically Nina’s dad Alf’s man servant.

We also find out that Ed may have been hallucinating about being in a castle. And his parents seem pretty normal-ish. Except his dad is terrible.

Instead, Nina’s family gives Ed a hard time. He doesn’t quite get their Australian senses of humor, and he’s surprised to find out that Alf is the mayor of Nina’s small hometown. And comes from a long line of mayors.

In some ways, this drama hinges on Nina being from a small town. There’s a family rivalry, causing two towns to war over sausage production. There’s a guy from the other family who thinks Nina and him are star-crossed lovers. (Nina, of course, has zero interest in him.) Nina’s mom used the date the rival family’s patriarch before marrying Alf.

Grandma Joan is a great character. You can see how she’s the backbone of Nina’s family, and she’s where Nina gets a lot of her confidence. She may get kidnapped, but we’re not exactly worried about her for any length of time. Joan’s one of those characters who tagline is — oh, you’re now locked in here with me. I love how she freaks out the boys with listing a bunch of medicines she (doesn’t) need. And how when Ed comes to rescue her, he’s confronted by emus, and then Joan chases them off.

Like any good Giant Days story, this is a common situation — meeting your significant other’s family for the first time — with some uncommon elements like roasting giant sausages and rescuing a kidnapped grandma. This does have one of the most realistic portrayals of jetlag ever.

Glad to see Esther getting over her crush on Ed and getting back on the love horse. I do love a good Esther in love story, and this is about the only kind of Valentine’s Day story I can handle. Sarin’s art is just enough over-the-top, and Cogar colors are saturated in pinks, reds, and purples. I like the choice to having Valentine’s Day avoiding Daisy wear pinks and purples.

In proper Esther fashion, she claims that she wants a different pattern in her relationships, but goes back to the same thing. Esther finds a very rich entrepreneur and then dumps him over his plans to build a hyperloop. I mean, at least she read the red flag correctly. Though considering he seemed to be hunting college for young women that’s also a red flag.

It would be nice to see Daisy at least go on a date. Since she’s our only queer character, it is rather sad when she doesn’t have a love life, even if she needs to fully recover after horrid Ingrid.

McGraw and Susan were pretty cute in this issue. They are so accepting of each other, and that is why they continue to work together. Also, I’m pretty much Susan in this scenario.

Giant Days has a new colorist. In other books, sometimes I cannot tell when they get a new colorist as that colorist takes all their cues from the last one. But on an indie book like Giant Days, that’s 45 issues and a handful of specials in, it’s noticeable. Lawson uses more primary colors and bolder swaths than Cogar did.

Also, in the scene with Ed, McGraw, and Susan in the pub, the colors are set wrong. I’m not sure where this error happened, but it gave it that slightly off, ‘did I end up in a 3d movie without my glasses’ look.

Of course, Susan is right about how Ed and Nina don’t have a ton in common outside of their shared injuries and being attracted to one another. I’m cautiously optimistic to how Allison will portray Nina’s problems with alcohol. Because it’s clear, there’s a problem, and Nina needs to hit up some AA meetings and generally stop drinking. This is not just college partying. She even says so herself that she cannot just have one drink; she always has to get drunk. (Though I thought they were perhaps casually drinking in the Australian special…)

I do feel for Ed as I’ve been there. I’ve been there with family members, with friends, with people I’ve dated, and with coworkers. Romance, though, is one of the harder situations. And Ed is such a nice guy at the end of the day.

I appreciated Esther supporting Ed. She supported him like a true friend, not someone who was jealous that she missed her chance. This is also a grownup moment for her.

Susan is ready for some destruction, and I am here for it. Again, I highly relate to her in so many ways.