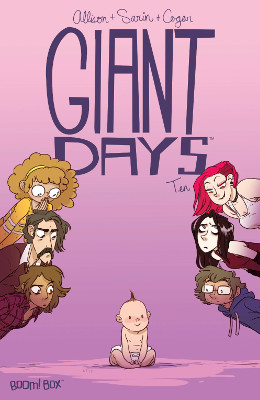 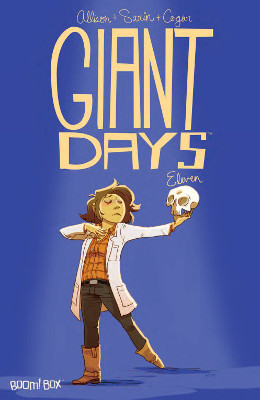 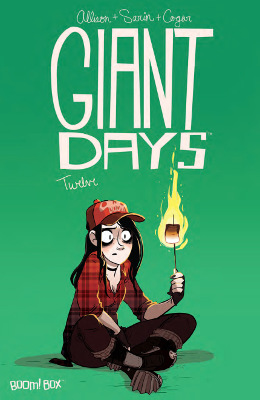 Unfortunately, I feel that Sarin’s art is really letting this book down. While she’s getting down the characters’ faces and their big expressions better, the backgrounds are suffering. I’m not sure what type of world they are living, but it’s very sterile and clean for dorms.

The story itself was sharp. Loved Esther having someone in her life who scared her because of partying. Big Lindsay turned out to be a lot different than Esther thought she was. I loved the later reveal that she had a kid and this was her first weekend away from him. It gave Lindsay a nice human moment. Plus, Esther and she can now have an adult friendship, not just one based in some kind of high school glory moments. You grow up and all.

Ed and Lindsay sleeping together was also the best. Nice confidence booster for Ed and no doubt Lindsay hasn’t had some me time in a while. But wow, Ed’s having much better luck lately with the ladies than he probably thinks he’s having.

Oh, Susan. I’m still not sure who’s the mysterious person feeding her all the gossip about the school and trying to get her to run for student body president. Hilarious that she wants to use McGraw as her pawn. Of course, it looks like her relationship with him may be a bit on the rocks. Even though she doesn’t see it at all. I assume the next issue will be about Susan.

Completely called McGraw breaking up with Susan. And we still don’t know who’s giving her the secrets. I kind of think perhaps Susan has cracked more than we think she has. Even further than the Night took her.

It was, however, really nice to see Esther and Daisy work to save Susan, given that they’ve both been saved by her. It’s good that she still has her friends. Which is what’s really most important.

Though is Esther even enrolled in school anymore? Is that still a thing in this book?

I’m not a huge fan of this entire election. It’s not getting enough to the heart of the story or perhaps not all the characters are involved so it feels like a distraction.

Oh, Esther, she might not go back to university! Clearly, it was the classes, not the friends. I loved the foreshadowing of her getting so sad when saying goodbye to them, but them only thinking it’s her typical overly emotional nature. Which is probably why Esther wants to quit. Especially with the affair with the TA, who’s now taking his heartbreak out on her.

Too bad Esther didn’t hear the dinner party say how much they liked her over him.

No one is surprised that Susan got played. She got played so much by those nerds. And her and McGraw have so much unfinished affection. Him and his sawing. Her and her tree ghost hugging, which are the trees he’s cutting. He’s cutting their love!

Daisy’s love of camping is cute. Especially when she’s seemingly surprised that Esther and Susan buy all the camping gear. Of course people who are terrified of camping will buy all the things to protect themselves from the outdoors.