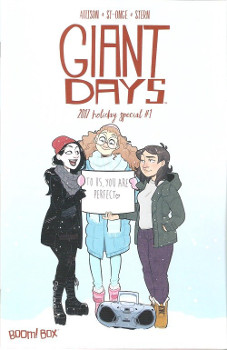 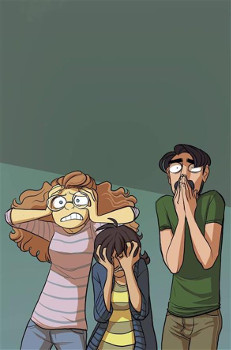 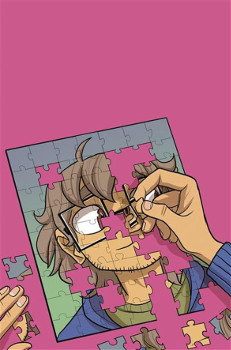 I will always be a fan of St-Onge’s art. So it was great to see her on this book. She’s the right type of artist to convey the fun of Giant Days. Though I’m not sure if her Susan is exactly cranky enough.

Of course, Esther met Shelley and other beautiful people on the internet. That’s how it goes. The whole scene where she tried to figured out what old email and password she’d last used to contact Shelley and then found her on Facebook was pretty hilarious.

We were all rooting for Cecil, but Shelley just wants equal rights. She’s not a prize! Plus, everyone knows that Susan’s, Esther’s, and Daisy’s plans to butt into other people’s lives always have to go badly at the end.

But who can resist letting a cat inside and giving it affection, even if you are terribly allergic. Cecil was right in that who in their right mind with life threatening allergies does not keep drugs on hand to fix it.

Of course, Sid fell in love with Esther. Because that always happens, and her suitors always go for over-the-top gestures to show off their affections. Which Esther always kind of likes even if she really doesn’t want it.

Everyone is fucking miserable about their housing situations. Except McGraw and Ed. Well, Ed is miserable. But Ed is also delighted to live with Esther. Of course, she ends up in a house with all guys. (Though seriously, who would willingly live with Dean again?)

Susan isn’t ready to move in McGraw. Even though he’d be a great roommate, and I’ve been wondering why they all just didn’t move in with him.

Daisy needs to dump Ingrid. Like whoa. She may have those joints down and her reclaimed wood, but seriously. (Though that was a great Germany joke.) If Daisy continues down this path, she may find herself flunked out of school or in the hospital.

Loved Emilia telling Esther not to be so pathetic so she didn’t feel sorry for her.

Housing is such a disaster. Loved that the landlord guy found a group that Esther sees as herself and her friends through the looking glass.

And now we have discovered that Ed’s love of Esther is really all about his high school girlfriend Callie. I do like how this book continues to talk about how when you grow up, you change so much that it doesn’t make sense to continue to date the same person. (Even if we have McGraw and Susan as our outliers.)

Callie is definitely just like Esther. Only blonde. Also, whose school does Twin Peaks as their play?

Of course, Esther was part of a means girls club that also harassed a teacher to madness. Putting the furniture back in the room the exact way it was originally was, however, a great touch, if you wanted to gaslight the teacher by making the principal believe nothing was actually wrong.

Pub crawls are bad ideas. Bad ideas that should be reserved for the young. I would’ve been on the floor after the third stop. (I’m also notoriously a lightweight.)

I love how consistent the book is when people get drunk/high. The bartender who throws them out is an elephant.

Oh, Ed, he’s going to break more than his heart. Loved the line where he asked Esther to get her bat friends away from him.

Susan and Daisy coloring together was adorable. The Black Eyed Peas was just random enough to be perfect. Seriously, there are so many odd adult coloring books out there.