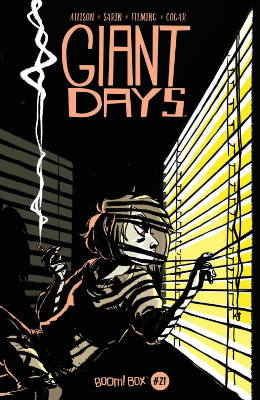 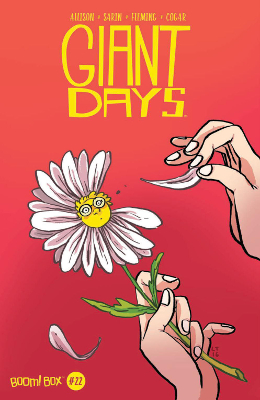 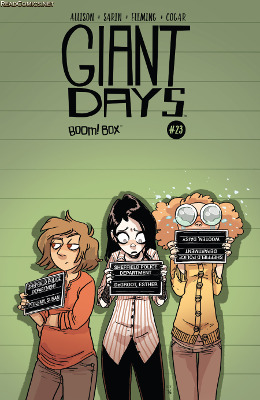 I’d kind of pegged their angry neighbor for pulling a prank on them — or an unwanted in the neighborhood signal — but nope, just a house break-in. Loved both Esther and Susan freaking out that they were the reason for the house being insecure. But it was a terrible door. In my last house, one of my overprotective friends noted that “even a weak person could’ve knocked down my door.” Oh, renting. (I was lucky enough never to have a break-in, despite the flimsy door.)

I’ve really appreciated how Sarin’s pencils have evolved since becoming the artists on this book. She’s really gotten down each individual character’s look. I love when she has them dress up as not themselves, but have their personalities still bleed through. Esther dying in her red tracksuit was hilarious. That ponytail! Of course, Daisy went for a hoodie and puffy vest and shows off her afro. She kind of looks more like a standard college kid than in her normal wear.

McGraw putting in their door and the policeman thinking that he’s their landlord was stellar humor. Same with the David Caruso parody for the cop. Yes, Susan, it’s okay to let the patriarchy win for a new door.

We are all crying with Daisy. Love the callouts to them being English.

Of course, they had to destroy Susan’s laptop due to germs. Of course.

Ingrid is back! And she just won’t take no for an answer. Though this time, it’s very clear that Daisy is into her, despite Daisy’s logical brain cautioning her that Ingrid’s a terrible idea.

College is the perfect time to have terrible relationships controlled by lusty feelings, if there was ever a time for that.

Daisy is always the responsible one, so it’s easy to see why Ingrid’s lifestyle would make her feel like everything’s falling apart. If Ingrid wants to continue to see her, she’s going to have to let Daisy led on some of the activity decisions. Relationships have to be balanced. Even if they are lusty ones. It is really nice also to see a queer character having sex (or at least as much sex as the straight characters have had).

Esther being the top oven cleaner is pretty hilarious. I don’t know if the polo shirt or the baseball cap is more awkward on her.

Interesting to see Esther reflect on their growing maturity as having less fun. Particularly when contrasted against having the police called on them, only to have those police decide they are nice spinsters.

Ingrid, however, is a lack of maturity. And while it seems to be the adult thing to be welcoming to your best friend’s girlfriend, Susan’s charity has more to do with her own motivations against taking Emilia’s advice.

Emilia and McGraw now in love is definitely only going to make things worse for Susan.

They really need to figure out how to get rid of Dean. I don’t think Esther owes him anything for using his fanboy rant about Wolverine vs Hulk to get her comic book store job. Those were ridiculous questions anyway.

Loved Daisy’s failed attempt to turn her and Ingrid into middle-aged lesbians. (Also, my sweetie is visiting me soon, and yes, we do lots of puzzles together.)

There was definitely more to Susan’s illness.