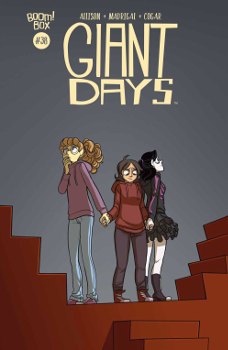 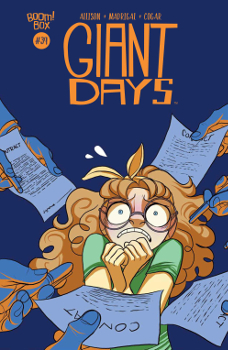 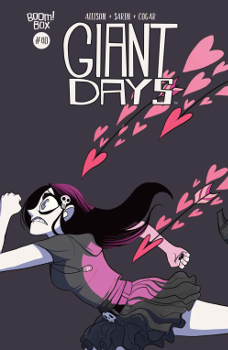 Dean, in particular, looks a bit more sinister than normal. His hair is shorter than it was the last time we saw him. I just cannot believe that anyone would agree to live with him, and oh, boy, he has set up Esther for a downfall.

Daisy solving the dorm’s problems were pretty amazing. Of course, she’s going to spend the time listening to people and making everyone be friends. That’s just who she is. And she quickly becomes the RA in charge. Shutting down the dance party was pretty brilliant.

And Ingrid is back… (Or at least her specter. I assume we’ll see the real thing soon.)

Dang, Giant Days once again describes job fairs and interviews exactly how they are. There is no passion in every job. Especially when you are just starting out. I wonder what sorts of questions people asked back in the day before notions around always being “passionate” about your work or “finding your passion” took over.

Of course, Esther frees at least one guy from his corporate job.

I’m not sure Madrigal is quite comfortable with Esther’s style yet. Her suit was downright conservative, even with the gothy tights. Seems like something was missing. Especially since we know how much Esther loves to dress up for any occasion with her own flare.

I loved Daisy getting a zillion job offers, and her calling in Susan for help. Susan can be the very best. Oh, how I wish I had a Susan to negotiate for me. (I’m very good at being a Susan for anyone not myself.) Though you’d think that Susan would’ve known Daisy wouldn’t want to work for a defense contractor making drones.

Loving the continued evolution of McGraw and Susan’s relationship. They understand how to be together without compromising their own futures. When Susan told him that his fantasy of being Mr. Fix-It and doing odd jobs was the greatest thing he’s built, she was telling the truth. And her reaction to him finding a way to stay was sweet.

Oh, Ed! No one expected this. I can understand how Ed wouldn’t want to tell anyone about his castle. However, if he wanted to find a way to make Esther infatuated with him…she is a gothy babe. And the money wouldn’t hurt.

There’s a lot of unrequited love going on in this issue. Well, except whomever Ingrid is macking on. Doesn’t surprise me that she’s already hooked up with someone new. That’s exactly how people like Ingrid run.

Once again, the ladies, plus McGraw, completely butt into someone’s lives to redo it. This time it’s Ed’s room. I know he hated it, and it was a pit of despair. However, there still was some missing consent in the room redo. Then again, highly-competent carpenter McGraw was completely in charge of it.

I love McGraw just redoing his and Susan’s apartment without permissions. That’s exactly them. I adored how McGraw explains his and Susan’s relationship and their space. Perfection.

Ed’s got a new love. Well, Nina at least has a crush on him. It’s been a while since we’ve had a whole new character.

Susan’s move to take them all away and hide Daisy from Ingrid was the right reaction. Too bad we can’t shoot Ingrid into the moon!