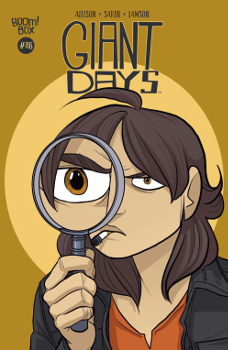 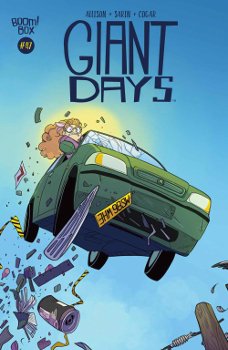 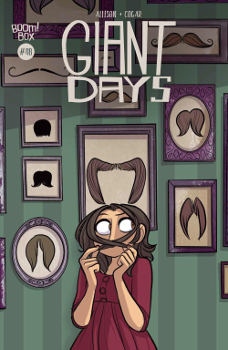 While I appreciate Allison and Sarin playing with the form of Giant Days, this didn’t quite work for me. Did I believe Susan would try to be a PI? Yes. Did I believe a young man was stealing from the comic shop to try to get Esther’s attention? Yes. Do I believe Daisy would be a menace behind the wheel? Yes. Yes. Yes.

However, the close point-of-view on Susan didn’t work. Mostly because we still had an omniscient view of other characters’ activities, and it wasn’t tight enough. The noir tone also didn’t entirely compose for me.

Giant Days is always so great with the jokes, and this didn’t push the noir into parody enough. Or have, say a scene where Susan is embellishing it even more than what’s happening.

One of my favorite parts was, of course, Susan calling McGraw to see if the drain pipe was secure enough for her to crawl up. Him being the perfect one who’d actually know this answer. It was an ideal scene for the characters and one that pushed the noir in the correct direction.

I suppose in some ways, driving does work like that: make all your mistakes, and then learn from them. I loved the idea that all those driving teachers were menaced by Daisy, and that Jackie’s crystals failed to work and she’d rather become a prison guard than continuing teaching driving.

Thank god nothing happened to Perkins. I didn’t think Giant Days would go and break my heart like that. It’s not a cruel book, and it’s the reason why, in an otherwise harsh world, I seek refuge inside its English bubble. Am I saying this comic book is my support animal?

Perkins is adorable, and of course, Daisy becomes Dean’s helper in covering up that they have an animal when they aren’t supposed to. I would love that little doggy too. Though no one is surprised that Dean cannot handle something that actually does need his attention on its own schedule. Perhaps they should’ve left him with Posey.

Not sure what to think of Frank. Though kind of surprised that he’s supposed to be 32, considering that would make him about 10 years older than McGraw. This makes their fights and pranks more inappropriate. I’m now imagining a 5-year-old McGraw getting beat up by a 15-year-old Frank.

Oh, Esther is going to bring down that wedding.

Ah, Susan, she has to deal with all her feelings about weddings. I’m basically Susan here, and this is why I don’t like to go to weddings. (I mean, if we are close, and you actually want me at your wedding, I will attend. (But it is a tool of the patriarchy!))

Karen is terrible, but good on Susan for seeing through her shit and not getting into a fight at Frank’s wedding.

Loved the scene with Susan and McGaw’s dad, especially his confession that they are all terrified of her. I mean, perhaps she should’ve guessed this. Of course, Susan’s suitable for the stick-in-the-mud that McGraw can be. McGraw’s mom’s gold tooth was too perfect.

Loved Esther’s dancing gag with her stepping all over McGraw’s feet with her heels. Yes. It pulled us back into the actual dynamics between these characters and showed the ways that family gets weird at weddings.

Speaking of weird, I have been Susan in the aunties situation. My grandma once announced I was engaged — spoiler, I was not — at a huge family-friends party, and I literally had some woman forcibly grab my hand to see my engagement ring.

Classic queer situation: Daisy worrying about falling in love with Esther, and then when Esther keeps her awake all night, she realizes that her feelings are not those of love. Not love at all. It was probably just the after-effects of the suggestion from the innkeeper and from reading Tipping the Velvet. Which the book in itself is a good lesbian cultural call-out.

Allison’s art isn’t always my favorite, but I do adore that his take on Susan has pointed teeth. This choice works so well for her. Also, Allison glammed up all the ladies for the wedding in perfect ways.

I suppose Esther was saving up all her drama for visiting her parents. Cleaning her room to a sparkling perfection is definitely a sign of significant procrastination.