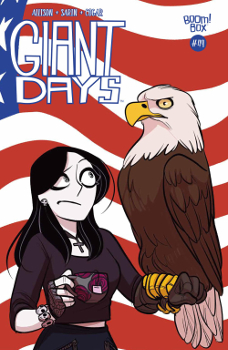 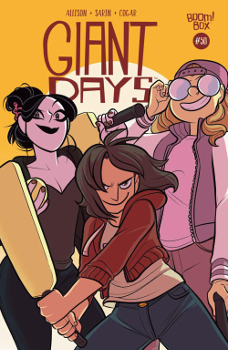 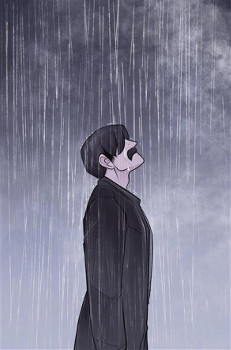 Peak Esther and peak the moment you realize that you can never go home again post-college. Such a perfect note of heartwarming and truth for her.

The American eagle dream was silly — but about as ridiculous as her drama with her parents. I loved Esther and her mom duking it out over Esther’s pile of dirty laundry, and then the twist of Esther breaking down over her parents’ home not quite being her home anymore when she discovers they are using different laundry soap. Too real.

Lottie remains the best. I loved the art of Lottie and Esther in the graveyard. It reminded me so much of the Buffy the Vampire Slayer, in the very best ways. Now I want a spin-off where Lottie is the protector of their town over bad supernatural influence.

Poor Eustace, Esther kind of ditched him again. Of course, she did have several emergencies back home as Lottie pointed out.

Also, the Great American novel is a terrible topic. I say that both as an American and as an English major.

The moment that McGraw refused to eat the fish, I knew exactly what was going to happen to his pub cricket team.

Susan’s explanation of cricket — which shows she knows way more about the sport than I — and her “hate the sport” t-shirt once again show how much I am Susan. It says a lot about how far her and McGraw’s relationship has come in that 1) she supports him and 2) he lets her get away with that explanation.

The running gag about Daisy being super great at every sport we’ve seen her play is pretty good. Especially in that, she doesn’t seem to have any real ambitions to play, except a few games of pool when she’s short on cash. The hot woman on the other team distracting her was great.

Esther cheering on Paul was adorable, and I could get more of them. Of course, Nina would be super into it and Ed and Dean would hang out in the corner where no one ever goes as they aren’t needed for anything except to be bodies.

Now for the sad stuff… The opening with McGraw trying to help his father with his wifi printer is so true to life. But then later when he gets the phone call that his dad has passed, it’s heart-wrenching. He may have been frustrated with his dad’s round with technology, but at least they did have a final loving conversation. Also, this hit me hard as I’ve been in the fun times with friends and without your cellphone to looking at my phone to see the 12 emergency calls and texts about a dying relative situation.

I’m just going to weep into my lacy white hankie. I’m kind of both a Susan and a McGraw here. It does make you feel on the outs when you don’t act around death like everyone thinks you will, but that doesn’t make you less upset.

Daisy does what Daisy does, and Esther what she is best at too.

Of course, Esther won that contest, and of course, she’d spend the money on her friends for a weekend away that they all need. And of course, she picked Bamford because of Maria Bamford. Then Esther would get an interview with a bank in London.

Nina’s comments about the trains in northern England were the truth.

The scene with McGraw and Susan in the woods was pitch perfection. I hope that this book is recognized for the incredible emotions and art accompanying it. It’s just something that you have to experience yourself.