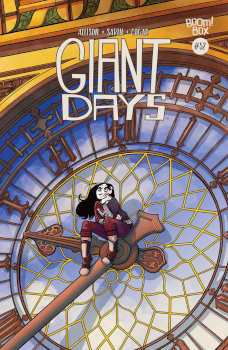 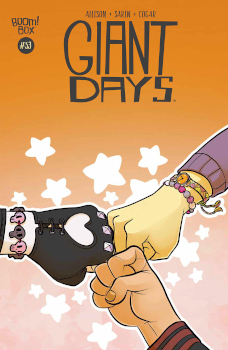 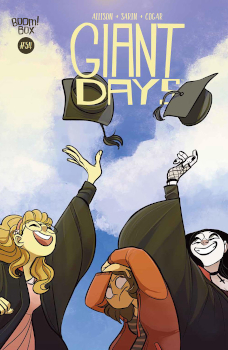 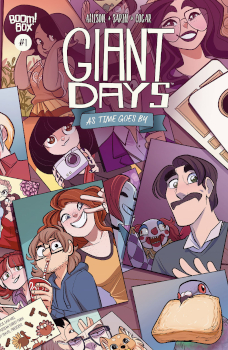 I am all for the return of Shelley. She’s so ridiculously over-the-top and the perfect mentor/hair icon for Esther. Though she might feel better about her romantic life if she wouldn’t taken the hookup from her last appearance.

Esther’s moment with the HR lady was priceless. I love how immediately Esther knows the world of finance won’t be for her, but also how she gets to the truth of how amazing jobs happen.

As a writer, I felt every bit of Shelley’s pain. Her locking away her romance novel, and Esther’s reactions to reading it were perfection. But Shelley’s got her little chicken-legged hedgehog creature to write children’s books about now.

That professor remains the worst — the worst cliche of the men who have affairs due to being lonely as if that will attract his wife back.

I love that Esther being true to herself — all the way truth — is what landed her a job offer. Her and Shelley skipping away from that party: just pitch-perfect.

Susan and Daisy at the spa were pretty entertaining. Though it seems like Daisy’s dorm kids will wipe every memory of her relaxation away.

Daisy’s struggle with Coraline, who drove her to waste the last hours of her college years fretting about pranks and trying to track down Coraline, was a perfect mood for how you do often waste those final memories on bullshit. Mine were spent worry about my not-quite-divorce parents behaving. Stupid. Should’ve been hanging out with my friends, who would (mostly) soon depart for other states.

Being part of the night was hilarious. I loved Daisy’s look. It was so perfectly cyberpunk detective. Esther’s reaction to the change was delightful.

I’m glad Saffy kissed her, and honestly that the book wasn’t about Saffy and Daisy getting together, but highlighting the friendship of Daisy, Esther, and Susan. Though I am surprised Susan didn’t take out Coraline, especially since Daisy was the only one giving her any benefit of the doubt.

I’m going to miss this delightful book so much. The cardboard kitchen was too much! I’d say who has that kind of time, but let’s face, we could just get off the internet for a bit.

Everything about Giant Days is perfect, especially how a year later, Esther doesn’t come to meet up for drinks with Susan and Daisy. Yep, that completely tracks as Esther is, I’m sure, destroying her way through London. (Or something terrible has happened, and she’s ashamed and hiding from her best friends.)

Esther saying, “goodbye forever” to Dean was most excellent. Of course, Ed cuts his hair to get his job, and Esther emotionally avoids her parents until the very last second, where she finds out how proud they are of her.

I could’ve read an entire miniseries about the six weeks that Susan and Esther spend as spinsters who share a bed. With twin duvets! Daisy’s insistence on taking the couch was brilliant. Esther passing along her comic book shop keeping knowledge cracked me up.

This book has so much heart, and I’m not sure what I’ll replace it with. It’s always been there for me when the world’s been dark, and I’m both looking forward to and dreading reading the final issue.

I hate to say that I didn’t love-love this issue. Yes, I’d somewhat predicted something awful was going on with Esther’s life, but not the Cressidas. They are pretty awful.

At the end of the day, I wanted more of Esther, Susan, and Daisy hanging out together and being on the same page. I understand what Daisy was saying about how, when you don’t see someone every day, you need to fill them in on the less obvious life details. However, the power of their friendship could’ve been stronger in defeating the Cressidas. Even if, yes, all three of them had special skills to help doing so.

Yay for Saffy and Daisy continuing to be together. She’s the perfect girlfriend, except that she sheds like a cat. (Which reminds me of my freshman year in college where I routinely had to cut hair out of the vacuum because both my roomie and I had long hair.)

Oh, McGraw, he just never wants to leave Susan. Even if that means making himself miserable. He and Susan bantering about her job being all sawing bones was pretty cute.

I know you shed and change styles to fit into the office, but it would’ve been nice to see Esther add some of her goth back in. Sure, she doesn’t have to be overly dramatic, but I highly doubt most of what she wore could’ve been tagged by HR. (Not that HR hasn’t tried and always picks on women about style when men can wear anything they want and the same thing over and over.) I’d be curious to see how Esther’s job adjusts with the Cressidas gone. Or maybe they were just exorcized from the bodies of some otherwise ordinary people.

Not enough resolution afterward for me. But I’ll still be over here missing what became one of my favorite on-going comics.