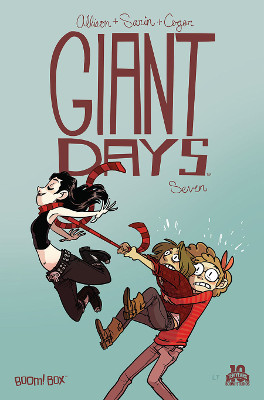 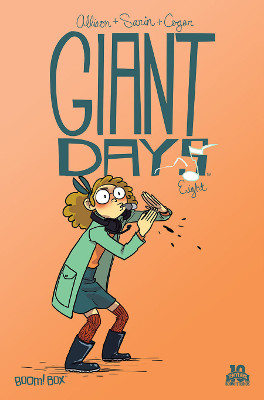 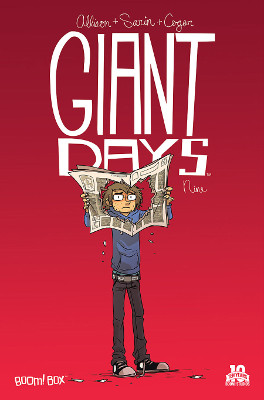 Sarin’s art is a nice match for Treiman’s. Boom definitely seems to understand how each book needs to keep its style in order to keep its readers. They understand this on an editorial side way more than DC or Marvel, especially as Boom’s working to build their own library of ongoing books. Sarin doesn’t quite have the exaggerated expressions as big or have quite the attention to details Treiman did, but they’re a pretty good match.

Oh, Esther… I was more somewhere between Susan and Daisy when it came to balance my studies and dating, but I remember a lot of Esthers. And I like, Esther, was told the same thing about being an English major.

I adored Esther’s continuing look and style. Her trying to get a priest to teach her about the New Testament, while dressed as a skeleton for a Satanist metal concert was pretty hilarious. She’s definitely one of those people who’d excel at school if she took all the time she spent trying to cheat actually studying.

Susan is rather terrible at keeping secrets. I also think that McGraw needs to grow out a man bun.

I’m glad to see that Daisy was very forward with Ed and explaining that she only likes women.

Love this story of Esther realizing that Ian is a milquetoast of a man. So basic. And on top of that, treating her badly and not appreciating her for who she is. Good on her for dumping him without Susan having to give her an intervention. Esther coming together and changing her outfit back to herself at the dinner party was wonderful. Would’ve been better if she would’ve heard their comments about keeping her, instead of Ian, as a guest.

Though I have a feeling there may be some trouble in the future between McGraw and Susan. The sled was incredibly sweet, but he didn’t bargain on hauling her around everywhere and over every hill.

Daisy really getting into Friday Night Lights was pretty cute. I haven’t watched it, but I’ve heard from others that it’s very addictive. I actually thought she was quoting Parks and Rec, but then I remember that FNL is Leslie and Ann’s favorite TV show… Anyway.

Oh, Ed and his unrequited love, that’s only going to end badly.

Oh, Ed, he definitely learned a lot of life lessons in this issue. I’m glad to see that he and Amanda actually hooked up instead of another unrequited love fest for him. Love seeing the contrast of his disaster relationships with his star rising at the newspaper, at least temporarily.

I also worked on the college newspaper briefly. And yeah, there’s very little that you can actually report on when you’re getting your funding, support, and supplies from the administration.

I’m betting that our mystery person is Daisy. Seems like something she would do, especially after her whole Friday Night Lights coaching in issue #9.

Also nice to see McGraw having a male friendship and bonding with Ed. And funny to pose McGraw as the worldly boyfriend with all the romantic knowledge.

Not so thrilled with Susan not knowing — or joking around that she doesn’t know — what mechanical engineering is. This is the first time this book’s really slipped up for me and put forth a stereotype that women aren’t into science. Especially since Susan and McGraw’s entire background and bonding in their childhood/teen years was based around academics.

I really liked Amanda, and I’m kind of sad that we probably won’t be seeing anymore from her.