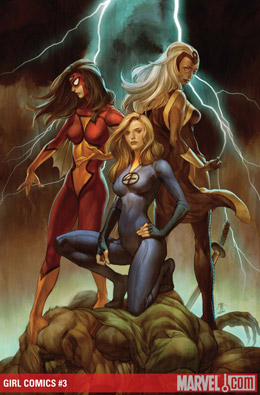 I think I’m rather sad that this series is ending, and it’s taken me longer than normal to put together my review, post-reading it. I hope Marvel continues to make an effort in hiring talented women to write, draw, color, ink, letter, edit, etc. their comic books. I would hate to see this “marketing stunt” turn just into that.

Jo Chen’s cover is my least favorite out of all the Girl Comics‘ covers. First, I don’t think they’re all super tall. Like beyond supermodel tall. Nor do I think they are as skinny (or could be that skinny). With some minor adjustments, this would actually be a pretty cool cover. A very striking one.

The biographies this time were rather interesting. They focused on Louise Simonson, Ann Nocenti, and Glynis Oliver. With exception of Oliver, the other two women each had a story following their bio. It made me want longer biographies on the rest of the women featured in Girl Comics. Maybe an add-on for the hardcover anthology?

Coover ends her on-going introduction on a perfect note. I loved seeing her image of herself at her desk with the ending, “We do it because we love it.” Yes. Exactly this.

This was an all-around excellent story and my favorite of this bunch. I’m pretty much a self-admitted Wolverine hater, but Liu really nailed the dynamic between Wolverine and Jubilee. They were completely sweet with their platonic mentor-apprentice dynamic. Their brief fight scene showcased Jubilee’s fighting skills (thanks to her training) even without her mutant powers really well.

The ice cream was the perfect bonding. It did seem a lot better than an adult substitute, such as beer might’ve. Seemed to be a more Jubilee touch as she was the one opening up to the Wolverine. If it had been Wolverine telling his sad stories, beer would’ve been the comfort food-stuff of choice.

They seemed so in-sync with each other, despite their separation. Just perfect.

I really liked the dynamic pose that the Enchantress is in. I like the brooding magic. The hints of it. However, I really think the pin-up would’ve been enhanced by a better background. Some action or a little context.

The Job by Louise Simonson

This story was cute, certainly, as the Power Pack fought against the Snarks and took care of baby Cable. However, as a newcomer to the Power Pack and their dynamic, I found it very confusing just who was who and which powers were attached to which kid. Jason said that he found much the same problem every time he’s read Power Pack when I talked with him about this story.

At the end of the day, this just felt like a cute romp through a day-in-the-life of the Power Pack. But there wasn’t much substance behind the romp. The art left me with a similar feeling.

A Moving Experience by Lea Hernandez

This story was very adorable. I love the fake-out, when it seems as if Magneto and Wolverine are fighting each other. And there’s been so many times that Magneto’s gone back and forth from being a bad guy to a good guy, that his flip-flopping served this story well. The reveal that Wolverine was helping Magneto move was very fun.

Likewise, the art went along perfectly with it. Hernandez has something of a simple style, but the way she moves the characters and changes their facial expressions brings the story to life. And who doesn’t love Wolverine riding on top of his little yellow plastic car at the end.

This was my least favorite story in this anthology. Nocenti certainly put effort into the story. She wanted us to follow the different personalities of Typhoid Mary. But I just don’t think there were enough pages to tell a story about her personalities. Four characters in one story is just overwhelming (see the Power Pack story) when there are only six pages.

What I did love about this story was Crabapple’s art. It was very beautiful and is the kind of art that I hope to see more of in comic books. I loved the textured backgrounds. And how her unique comic style gives a free-flow to the page, which encourages reading. I’ll certainly be on the look out for her name.

I love how confrontational Elektra is here. Like the one reason she’s not coming after us (the viewer) is because Daredevil’s reminding her to maintain her cool with his hand. I love how she holds her two bladed sais, ready to attack. What I don’t love is the ribbon costume and her nipple. Could’ve done without those.

DeConnick writes a lovely Satana. One who almost seems as though she’s on a mission. A mission of chaos. I like how DeConnick moves Satana further into the realm of Marvel’s magic players, instead of just demonhood. Even if she is still presented as a succubus.

The art in this story underwhelmed me. It felt almost too big, too much. And I’m not sure how well Melo and Benes’ styles blended together. In a lot of ways, I almost think the art cheapened the tale. Though I did like Satana’s hair.

This story was a very fun tale of Kitty’s 21st birthday party. Which makes for the third Wolverine story in this comic, and the second one about the young girls which Wolverine mentored. Kitty is perhaps the character which you can actually believe she hasn’t had a lot of experience drinking before her 21st. I love her trying out various drinks, because yes, you aren’t born knowing what alcohol tastes the best for your palette. And the Thing was so the friend that always challenges you to a drinking contest.

McNeil did the best job at putting many characters in her short story and not overwhelming the narrative. Kitty is the focus the entire time; everyone else is rather extraneous, especially after Kitty starts drinking. And for the most part, I thought every character was pretty on-target. (Except the part with She-Hulk and Dead Girl, because She-Hulk doesn’t make fun of people like that.) I particularly loved the part with Lockheed. Because I don’t know about Kitty, but when I’m drunk, I often want my bed and the other comforts of home.

The ending was fabulous with Wolverine taking Kitty home and their exchange:
Kitty: “I love you, Wolvie.”
Wolverine: “I know, kid. You’ll grow out of that too.”