Reviews for Miss America #1 by Jen Van Meter, The Invincible Iron Man #14 by Matt Fraction, and Avengers/Invaders #12 by Alex Ross 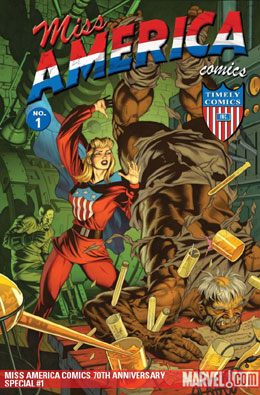 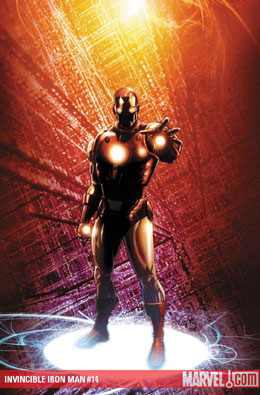 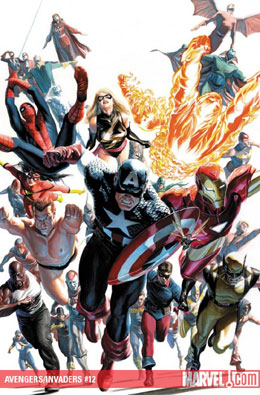 When I read the first couple pages of this comic, I was worried that Miss America was going to be boring. That it was trying to stay too true to the Golden Age style and culture. But once Miss America or Maddy came into her own, I really started loving it.

Maddy manipulating her uncle to get a position working on the ship was classic turning this era on its head. Plus, the entire shipyard is so Rosie the Riveter as Maddy unabashedly uses her super strength. (Which reminds me of the Buffy episode, where Buffy tries her hand at construction and can carry beams with a whimsical ease, while her burly male co-workers lift them in pairs.) Oh, inappropriate use of superpowers, which were once more flagrant throughout comics.

It was really fun to read a comic full of only women after the first few page. Maddy’s fellow workers and the inevitable villains are all women. Win. I love that it takes some teamwork between Miss America and her coworker/friends to take out the super villains completely and tie them up for the police.

As witty as “On Sale Never!” is at the end of the issue, it did make me a little sad.

This would’ve been a five, but someone decided Miss America needed blonde hair on the cover when she’s a brunette inside and that reprinted comics in the back don’t even feature Miss America. (Though Whizzer, the hero in a yellow costume, will never not be hilarious.) Fail, editor.

Tony, Tony, where do I start? Mostly, I start with hoping that Matt Fraction has some sort of logical plan to dumb down Tony. Right now, he’s forgetting things, but seemingly not other times, and it’s rather weird. Of course, the brain itself is rather weird.

I did like seeing how the world isn’t playing so nice with Norman Osborn. Even if in all the other titles, it seems like he has the whole world in his hands. (Sorry, couldn’t resist.)

Of course, Pepper is going to go after Tony. And I’m not sure how cool the name Rescue is. Though I suppose as The Captain often complained, all the good names were already taken. At least, she’s not Rescue Woman or Rescue Girl.

Of course, history righted itself. Oh, the cosmic cube is rather a deus ex machina plot device.

It’s interesting to see that Ross doesn’t think sending a message to your 16-year-old self will save you from being brainwashed into a Soviet weapon for decades and then go rogue to become Captain America after Steve Rogers dies. There’s a lot of things I wouldn’t mind telling my 16-year-old self, but if Ross is right, she’d just probably do the same stupid shit again. Though maybe not since she wasn’t busy fighting Nazis and Baron Von Zemo.

Overall, I think this 12-issue mini-series suffered from too many characters. The Invaders team was already large, but then you add two modern Avengers teams on top of that and there are just too many players.

Mostly, I need to figure out if this story is canon or not. Because if it’s canon, I think that means the Wasp is alive again. Also Vision and Toro.