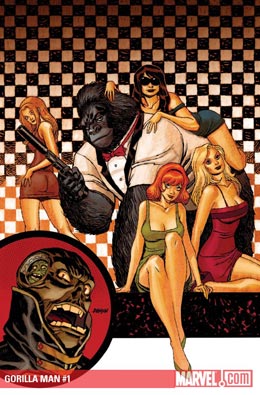 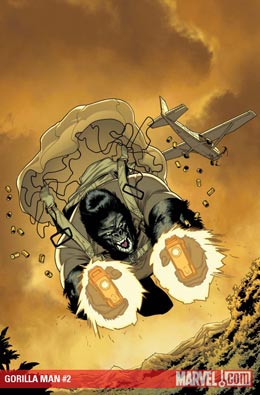 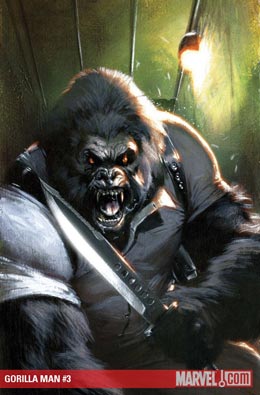 Parker certainly excels in writing Ken. It’s clear, he’s having a lot of fun. I love how we’re pulled in with an action story and how that story ties into a deeper one about Ken’s origins. Specially who Ken was before he became the Gorilla-Man. We know he was a mercenary of some-sort, looking for immortality, but we don’t know a lot more about him otherwise.

The battle with Borgia Omega and his henchmen of art was fun. And that’s what I was expecting when I bought this comic. I love the steampunk sensibilities of how Caracuzzo depicts Borgia Omega. And finding hidden treasures and heads inside sculptures and behind paintings is perfect, classic Agents of Atlas. I also loved Ken recruiting some of Borgia Omega’s henchwomen, and Jimmy lecturing Ken on how they don’t need more people on the payroll.

I love little Ken the orphan, and how yes, in the 1930s, rich people could basically buy children like J. Avery Wolward does with Ken. Everything about Parker’s presentation of Wolward says that he’s a collector. A collector whether it’s a collector of orphans to mold to his ideals or whatever else he’s going to send Ken after.

The little bit of humor with Bob’s holo-projector wristwatch work well to keep it light. As does Ken’s brief knife fight with Ji Banda, who never learned the secret password to prove Ken’s on his side.

This is one freaking good comic book, there’s no two ways about it. I love how seamlessly Parker weaves the past and present. And even the moment where he hangs a lampshade as Banda asks for more of Ken’s story, really works here.

I can tell Parker loves writing about Ken’s past adventures. About him braving to cross a lava pit in order to get a golden bird, just because he can. I also enjoyed how Ken now sees his younger self as fearless and also as a survivor due to the stupidity of youth and a belief that he’d never die.

The revelation that the snake-headed cane is magical and inspires loyalty was really well done. I enjoyed that Ken was seemingly unaffected by it, and how Wolward liked that about Ken. And how upset he was when Ken went off to fight in WWII.

The one part I wasn’t so keen on was that Ken fought with Fury and the Howling Commandos, because really, who hasn’t?

Now that Banda and Ken have reached Kazun’s hide-out, I’m really looking forward to the conclusion and hope it’ll be just as strong as the rest of this series.

I found it a pretty interesting that Ken and Lilly ended up together. At first, I thought maybe they’d become adversaries. Thus, I was a little surprised to find out that they married.

I’m not sure what Parker was saying about Ken getting weaker as he was with Lilly. Hopefully, Parker was just making a general comment on aging. And how we all eventually get sick and die. However, the order in which the story is told makes it seem like marrying Lilly made him old. Some sexist comment on women making men age.

It was redeemed a little bit by Ken leaving his good life in crazy pursuit of immortally. But not enough for my taste.

After the second issue, it was pretty obvious that Mustafa Kazun would turn out to be Bastoc, Wolward’s archenemy. A far less exciting reveal than I had hoped for.

I also rather figured that Ken couldn’t be charmed by the snake anymore.

But all-in-all, I really enjoy this series. I hope that Parker finds another vehicle to tell the rest of his Agents of Atlas tales in. I really enjoy them and would hate to see such wonderfully crafted characters die in obscurity.