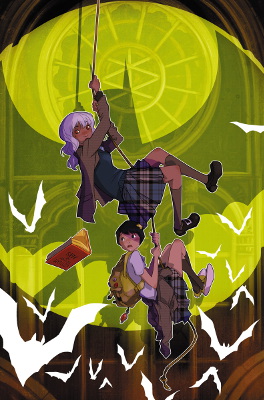 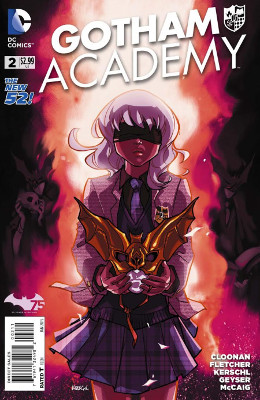 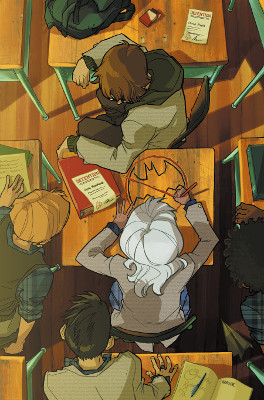 I’m not sure entirely what I think of this book. I really want to like Olive Silverlock, but perhaps she’s coming off a little too traumatize teenager for me. Likewise Maps Mizoguchi is a cute character, but not one that I’m immediately endeared to. She very much reminds me of the wide-eye exploring kids in anime. (Of course, Kerschl’s art style is heavily influenced by anime, so that could be another reason for the connection.)

Kyle was kind of a lump on a log. I thought for sure as an ex-boyfriend, he’d have more an impact.

I’m kind of the surprised that the rich of Gotham don’t send their kids far away. Clearly, Olive’s benefactor Bruce knows a little more about her, perhaps as Batman. I did love the head injury way in how she recognized him as Batman.

I have a feeling that Lucy’s either going to appreciate Olive or end of hating her a lot.

I’m not sure how fond I am of stories where the main female character has lost her memories. In that it makes the character lose much of their agency, which is a huge problem already in comic books. Additionally, this is common trope in comics and seems very much tiring.

Also, if Olive’s mother is a super villain — or powerful sorceress — seems like she’d know a little more about her life.

Pomeline’s a brat, but it also seems like she has information about Olive. While she’s disrespectful at school, there’s definitely some terror in Pomeline’s eyes when Olive shows up in the moselem.

I am excited to get to know some of the adults. Seems like Professor MacPherson could add an interesting perspective to the mix. It would be nice for Olive to have an adult mentor or adult that she trusts to talk too. Especially since she’s going to be sorting out her memories.

For some reason, I’m just not as excited about this book as I feel that I should be. I haven’t quite figured out what it is. I’m entertained by it, but not enthralled with it or super excited to read the next issue.

Yeah, there’s definitely something going on in North Hall that is very much not the ghost of Millie Jane Cobblepot. In fact, they probably actually would be able to deal with a ghost much easier than whatever’s going on. I am glad that it looks like this first arc will clear up Olive’s memory problems as she has some flashbacks of a fire and Batman saving her while in North Hall.

Nice to see Olive resolving some of her angst around if she and Kyle are still dating or what’s going on. I like how he tells her not to break Maps’ heart as a byproduct of their own breakup.

Colton Rivera seems to be the average kid getting himself into trouble and acting much cooler than he actually is. I was kind of surprised that Cloonan and Fletcher kept him so brave when they found the person/monster in the hole. I expected him to run and scream louder than Lucy.

I’d like to see Pomeline grow beyond the average mean girl. Heathcliff really seems to be regretting dating her.