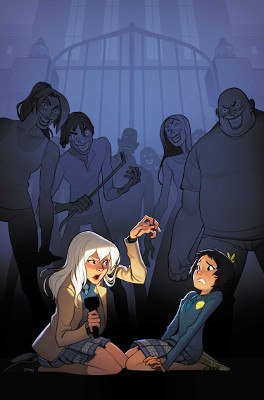 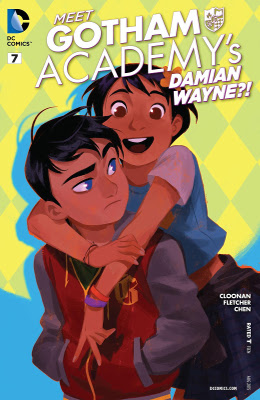 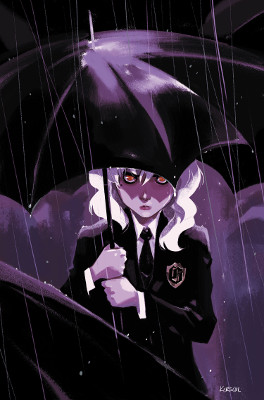 Loved the reveal at the end that it was Hammer who defeated all the Joker zombies. That he does work hard to keep the school safe and make sure supernatural threats aren’t allowed.

The stories were cute and worked perfectly for the type of issue this was. All the other narratives and art fit beautifully with the main story. And they were all somehow about the Joker, if not directly so.

My favorite one was Ang’s. Mostly because I like this idea of the DCU having a bigger theme around the Joker and each culture having essentially their own Joker mythos. Professor MacPherson sharing about the Wandering Jester felt right.

The same way Pomeline’s story felt directly from their situation and Olive’s story very much something her mother heard in Arkham. The Joker being a bigger than myth than man/monster.

So Damian already got himself kicked out of school. Hammer doesn’t seem like he’d be one to back down on it.

Love the magic quill and its consequences. Professor Scarlet read like the Riddler. (DC wiki says that he’s called the Bookworm.) And since he’s still on campus, I’m going to say that Maps and company may still be in some danger from him.

I enjoy how much Professor MacPherson and her dog Ham are just along for the ride. You’d think Hammer would be equally upset with her for indulging the children.

In general, I adored the way that Maps pieces together the mystery and falls for Damian. Especially when he pulls out the batarang. Maps may have met her match.

Now Tristan doesn’t have any secrets about his man-bat state. Maps and Kyle now know all about him. Though I wasn’t a fan of how Kyle didn’t figure out that Olive already knew about Tristan.

This was an interesting change of point-of-view, in that we were put into Kyle’s world instead of showing Olive fully in her grief over her mother. Kyle’s life is much less interesting. He also doesn’t have the natural curiosity which fuels this book.

Though Maps basically being like “duh” was pretty good.

Now I want to know more about Olive’s fire powers. This story has two of my least favorite tropes: forgetting and too powerful woman who can’t use it. So far Cloonan and Fletcher have been doing a great job, but I hope we get answers sooner rather than later. Glad to have MacPherson on the kids’ side.