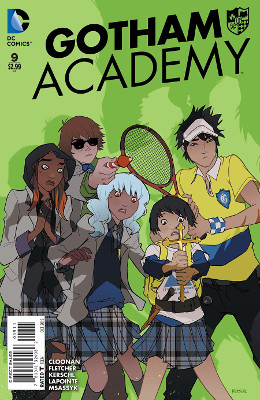 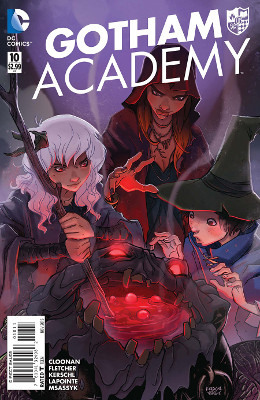 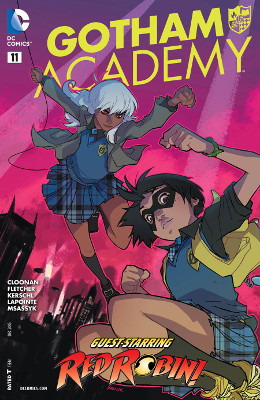 Not sure if this book is exciting me as much as it was. The plot is rather weak, and I’d love Olive to find more about her powers and accept herself. The setup is all here, especially that Olive now has other people around her to help her (adults), support her (Maps, Kyle, etc.), and understand having weird powers (Tristan). I hope the book goes in this direction soon.

As silly as a plot about a werewolf is, it was good to see a teacher — in this case, Coach Humphrey — afflicted with something supernatural.

This Calamity character will be more interesting when we know more. I’m glad Olive called out Pomeline for reading the note Olive’s mother left her. However, it’s good that Olive now has someone who understands more of what’s going on. Especially since Olive’s powers seem to put her in some kind of trance.

You’d think the teachers at Gotham Academy would know better than to do the Scottish Play. They’re had ghosts — even if they weren’t real — batboys, werewolves, and random fires. Simon Trent should know better.

I liked the twist of Katherine as Clayface’s daughter. It worked well with the mythos that we’ve already adopted, and it’s nice for Olive to be not the only child of a super villain.

Maps getting upset about Olive not being her best friend when Pomeline learned something before her felt very childish. It’s great to see characters still being children in the midst of all their trials and tribulations. Cloonan and Fletcher always, at least, make them go to school, but rarely do we see the kind of full immaturity of children.

Calamity, though, appears to be alive. Whomever she might be. That’s definitely going to change Olive’s outlook on life entirely.

I’m glad to see that we’re finally getting to the bottom of the mystery of the Silverlock family and Calamity’s reappearances. I’m really hoping this gets fully wrapped up by the next issue. Especially if Olive’s coming into powers of her own, that would be a much more interesting story.

I loved Maps accidentally becoming a Robin, in that she still had Damien’s batarang. Especially when she asked if Batman was going to call her. Too cute. Though Tim (Red Robin) is always the most sarcastic of the bunch.

I’m not really convinced that Maps and Olive could’ve climbed down a rope from those heights. Like maybe, but there was some suspension of disbelief.

Now we gotta find Lawful Good… (That was definitely a great characterization of Kyle.)