Since this review was posted, Hope Nicholson was outed as an abuser. As comic books are a collective effort, this review will remain live, but I cannot in good faith recommend purchasing this book or other works by this person. 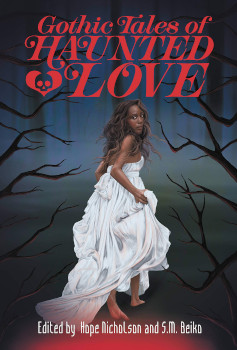 Both Nicholson and Beiko did a fantastic job of curating this anthology with the theme around Gothic Romances. I greatly appreciated the opening sentiments and historical look at this genre of comic books by Nodell. Of course, this genre would’ve been squashed by the comic book code of authority and fell “out of fashion” when mainstream comics moved almost exclusively to superhero stories, instead of the many genres they used to cover.

All of the stories featured inside were entertaining, and I was extra pleased to find that all of them — no matter how short or long — were a complete story. Too often in comic book anthologies, you get the sense that the creators wanted something longer, but couldn’t get the space.

I appreciated that this anthology featured several queer stories, stories beyond just romantic love, stories featuring people of color, and stories set outside of America. It showed how flexible this genre is — and how it’s not just white ladies running from sexy ghosts.

Hetherington, Sutton, Kinzie, and Saam’s opening story, “Crush,” sets this tone. It features Constance, a black woman hired as a governess for a bunch of rich, white, motherless children. While taking care of the children, she observes their father attempting to find a new white mother for the children. While the reader thinks this will be a story going either of two ways — Sound of Music style where he falls in love with the governess, or Blue Beard style where all this white women dates turn up murdered by him — the story is twisted to give Constance more agency and also more horror than either of those options. The art itself is reminiscent of the original comic genre, adding to the effect and this anthology staking out what it will be and what it won’t be.

Similarly Coover’s story “Rose’s Heart,” Nicholson and Chantler’s “Goldblind,” Robertson and Henderson’s “The Return,” Searle’s “Ladies of the Lake,” Beiko and Kobabe’s “A Heritage of the Woods,” Stone’s “Lover’s Moon,” Kearney and Spencer’s “Mistress Fox,” Guttman’s “One More Cup,” Nikolova and LAB’s “Ouroboros,” and West, Fawkes, and Saam’s “What’s Best” all take these classic romantic and horror trope blend and attempt to tell something new. They are mixed in outcomes with some of the weaker stories not being able to figure out what to say that’s new. Some like “Rose’s Heart” knew how to smartly play with the genre of a lost lady in the woods, and others like “Ouroboros” didn’t add to the Romeo and Juliet trope. “One More Cup” is worth it for the art alone, even if the end is inevitable.

The delightful lesbian “L’Heure Verte” by Sobowale, Dougherty, and Saam stood out as the only story that was truly sweet and tender all the way through. It was flirty and fun, but maybe less horror than all the others. I do love some beautiful costuming. All the other tales seemed to have a strong, lasting impact on the characters, or at least more strings attached to violence and consequences.

The stories that stood with me the longest were those with cultural and political consequences, and those that showed the real horror was actions not by the supernatural, but the humans in the story.

Nika’s “Secrets in the Silk” took the horror of men taking credit for a woman’s work to an extreme. The art in this — particularly how the ghost is portrayed — and the emotional arc are incredible.

Pham’s “Minefield” told both a beautiful and harrowing story during the Vietnam War. It was a smart editing choice to leave the Vietnamese dialog in Vietnamese and not offer any translation into English. The love story worked effectively as did the confusion of war and the American soldiers not being able to see who was their enemy and who was not.

Higgins and Rozsas’ “Geen, Gold, and Black” showed one of the worst parts of slavery — the rape of female slaves and subsequent births — and the implication and actions of white women to support this system. These white women knew exactly what their husbands were doing. Here, what brings the black woman, who’s been enslaved, raped, abused, and forced to watch her babies be murdered, comfort is the supernatural. Comfort is her access to her ancestors and to her ghost children, knowing that death freed them. And what’s a larger horror in this world than a mother being glad her children are dead because living was a fate worse than death?

“Fazenda do Sangue Azul” by Pueyo and Dante L. was one of my favorite stories. A casual look would put it in those more uncomplicated romance and horror tropes. We have a man who falls in love with a ghost, and a ghost who cannot leave the estate he died on. Instead, it’s a story of the legacy of colonialism and a journalist hiding in 1968 from the political turmoil happening in Brazil. Hernanes finds himself on an abandoned estate and in the company of a ghost. I don’t want to spoil anything here, but through a process of reconciling the past, the two can find love and some kind of happiness. The art is fantastic and mood-setting.

Noelle and Paige’s “My Heart Still Beats for You” is a surprisingly modern tale and set inside a very modern hospital. It’s maybe a too literal play on “ghosting,” but with most of these stories set in some kind of past, it stands out as trying something different.

The story I didn’t know what to make of it — “I Am the Song” by Castellucci, Dawson, Kinzie, and Saam — which I read twice and still don’t know what was happening here.

And finally, the reprint of Kim’s “The Promise,” a Korean gothic horror tale printed during the heyday of this genre in the 1970s. While a romance trope featuring a man promising to marry a woman and then facing the consequences when he doesn’t, this story, even in 2019, feels new and fresh. I’m curious how much of it is a Korean trope, and how someone Korean reading this story would look at it. It does have the pitfalls of many 1970s comics — too much text — but it does what the best comics do, they draw you into the story and into the word. I wanted to know more about how these women would finally find some peace.

Overall, Gothic Tales of Haunted Love is a smartly edited, entertaining, sometimes scary, sometimes sexy, and occasionally harrowing anthology. I’m looking forward to the second volume and the new stories to be told.