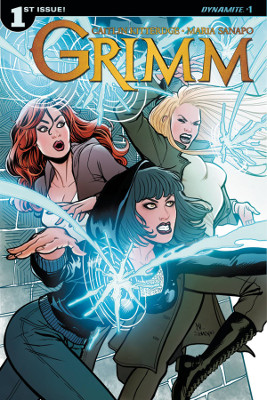 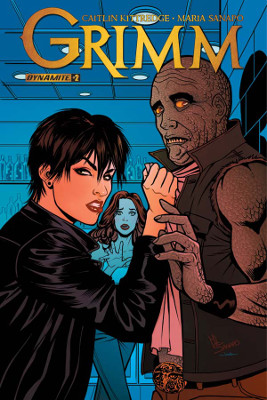 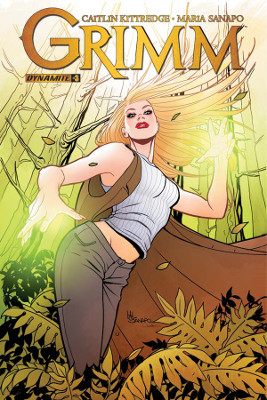 This book is everything I’ve ever wanted in a Grimm story. Everything in that I’ve always wanted is for Juliette, Trubel, and Rosalie to be great friends and work together in order to solve mysteries. Grimm has never been able to deliver. And, of course, this takes place when Juliette is trying to hide her hexenbiest powers.

In typically, Grimm fashion, the main crime happens when one of the characters is present. Juliette in the art gallery. Portland is small, but it’s not this small.

One thing I noticed when reading this book, compared to hearing people say things on TV, is that Grimm has ridiculous (or kind of German) spellings for words. It makes it harder not to be thrown out of the story. Which has nothing to do with Kittredge’s writing.

My main issue is Sanapo’s art. In many ways, she tries to draw all the women as super beautiful. Yeah, sure none of these women are slouches in the looks department — they are on TV after all — but they all aren’t model pretty. Except Juliette. Rosalie is a lot more homey, but she’s a gussied up bohemian here, and Trubel’s makeup and hair is far too runway instead of a runaway.

Additionally, Sanapo doesn’t seem to know how to draw Wu. At all.

The art continues to be not my favorite. Trubel is laughable. Like her hair is “close enough” to the TV character that I can track who she is. But tracking women by their hair is one of my least favorite things in comic book art. I do think Sanapo’s Wu improved though.

Interestingly Adalind on the last page is the one who most looks like the TV character. I don’t need photorealistic drawing just because it’s based on a TV show, but I do need to be able to tell them apart without labels. At least all four women have different hair colors. Though Juliette’s hair is typically darker than it’s shown here.

The plot is a little silly and lackluster. I mean, the show is basically that way. I feel like I watch it out of completism. I do hope Kittredge ups the amo or makes a more complex plot. Chasing some art thieves seems a little mundane.

The scene with Izzy and Juliette was well done. It tapped into some of Juliette’s own guilt around what happened to her and others due to her own powers.

I am looking forward to this map painting panning out to be something more.

This book continues to still be pretty awful. The addition of Erramouspe on pencils doesn’t help the way I wanted the addition to. Same with the additional plot elements. But it seems like maybe the ladies will finally need to team up against Latimer. All I want is for the ladies to team up and work together.

I am glad to see someone in the Grimm world tackle the feelings about Adalind raping Nick. The show just brushed it off as a sexy romp. It never really showed it assualt. And then later, in the show, we see Juliette change into Renard and have sex with Rachel Wood, which the show doesn’t address in the same way. Instead, Adalind’s assault of Nick becomes about her getting pregnant (fertile Myrtle), about the baby, and Juliette’s dreams about marrying Nick and having his babies. But even here, it’s Juliette, not Nick, processing the fall out.

These issues also take place in a weird place in the series. Juliette has become a hexenbiest, but none of the crew know. Except here the baddies have figured it out. I don’t really understand how Juliette can spend that much time around Trubel and not expose her woged face. Additionally, we know Adalind is pregnant, but Juliette and the rest don’t.

I’m not sure how I feel about this hexenbiest gang being indebted to Latimer. From what I can tell, this is going to be a five issue run. That’s not a lot of issues for that amount of plot. Like they could’ve just stuck with a map to find some powerful mystical object.