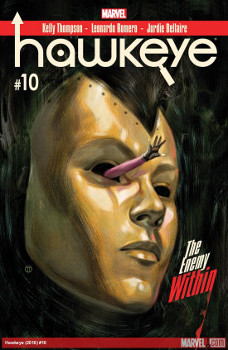 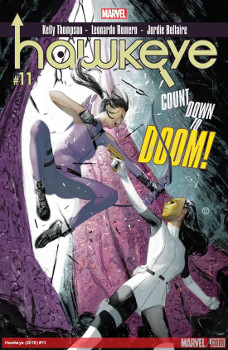 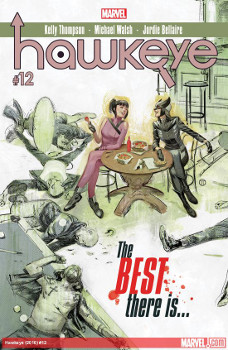 Once again, Jordie Bellaire steals the show with her coloring. Seriously, the coloring alone moved this book from a 4 to a 5 star issue. I loved the choices on Sunset Strip and inside the nightclub. The lights and the atmosphere were completely conveyed by the coloring alone. And such a great choice to contrast the bright club colors with the greens and yellows used in Madame Masque’s prison and base.

Of course, Romero’s pencil and his layouts shined too. I loved how we know it’s not really Kate just by the little things Romero shows us. Kate is not obsessed with going out, so when her friends show up, they are dressed for a movie night on Kate’s couch and Kate’s ready to run the red carpet.

You also know this is not Kate during the club and fight scenes. Madame Masque as Kate has no pre-plans. There’s no Hawkeye vision. Thompson also has her using knives and guns, which are decidedly not Hawkeye.

Her friends calling out that the real Kate would be making more bad jokes was pretty great.

I liked that Madame Masque locked up both Kate and Lucky. Yep, Lucky would cause a world of trouble. I’m just glad he’s okay.

Kate taking the opportunity to both “told you so” at her father and ask him about her mother while he’s tied up is pretty great. Hopefully, we’ll all get answers next issue.

I loved this Hawkeye vs Hawkeye fight because Kate was Kate and the other was Madame Masque. The fight style was done so well. I loved the nods to their different methods of fighting, and how Kate wasn’t going to let Madame Masque die because she’s a superhero (more than possible information about her mother).

The fight ended perfectly with Madame Masque disappearing, and Rivera commenting how they will never find her. But then the cops search the hills anyway.

The only moment that took me out of the story was why they were fighting on the Hollywood sign. It didn’t make any sense beyond it seemed like something Thompson and Romero wanted to do, and it made an iconic Hollywood visual with its own stakes of falling off the sign.

Tacos. Tacos are so important. Anyone who is not into tacos is suspicious.

I was surprised to see the bit of romance. Though if Kate is so observant, she should notice that she had two admirers.

The scene with Kate and her father was perfect. Even if we still don’t know anything about what happened to Kate’s mother.

I did appreciate the clarification that Kate’s dad at least believes he killed her mother. Kate’s correct to question if anyone’s actually dead in this world.

Gabby is adorable. This kind of makes me want to read a Wolverine comic book, but I also doubt it’s as adorable. (Though I don’t see how it couldn’t be!)

Jonathan and Lucky are best friends forever. Yes, this is the greatest thing that has happened. Though I am surprised that neither came on the mission.

Kate must start stocking her fridge if her friends come over to her place. She’s a bad hostess.

I loved how much Kate envied Gabby’s inability to feel pain. (This is, by the way, a real condition, which is very bad as without Gabby’s super healing not feeling pain causes a ton of issues.) The cutting off their feet thing was icky. I’m so glad that we didn’t actually go there.

This is the type of team-ups that actually work.

Walsh’s art fits the book well. I was worried about the change, but it was well done.