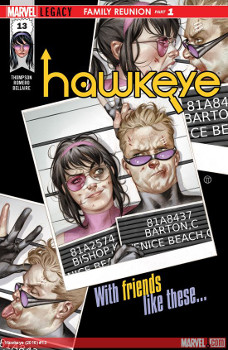 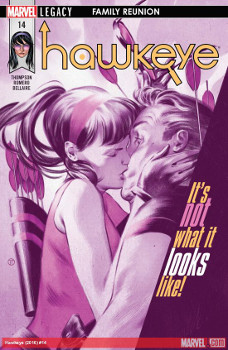 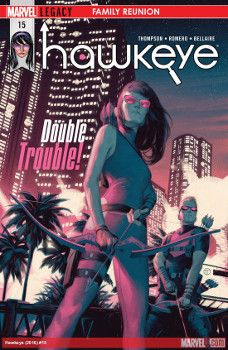 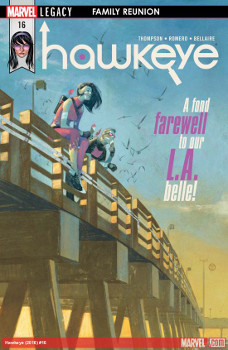 Before Thompson started writing comic book, she blogged about them, and would specifically review all the comic book covers when previews were released. I keep laughing as I ended up with a variant cover for this single issue with a giant Kate floating head. It’s so bad, and was one of Thompson’s favorite things to make fun of. (And not that she controls variant covers, or any covers, at all.) Marvel tried to charge more for it too as an “incentive” cover, and this cover was so bad that my local comic store sold it to me for normal book price. Of course, this series struggled to find itself in my pull list for some reason.

So I didn’t read the Hawkeye Generations book…seems like maybe a few details of what’s going on with Eden would be explained.

Clint’s costume sleeves and lack of sleeves really bother me. The good thing is that Romero is super talented, and he did a great job at making sure Clint’s long-sleeve stayed on one side and same with Eden’s hair. (Asymmetrical hair is now something I always pay attention to since the first volume of Kim & Kim and the constant issues with Kim Q’s hair.)

In general, I’m not as enamored with Clint Barton. I like how Kate has come to realize that she needs help. But also, perhaps Clint’s just as messed up. Especially when he doesn’t tell her that he’s being hunted before they go out to pizza. And, you know, sit outside in public.

I understand that we’re in LA. But we just had the Hollywood signs, and now they are fighting through the Chinese Theater, and it’s a bit much. Also odd that the surfboard shop Kate’s friends work at is right there. And they should definitely pay for those broken surfboards.

Is that Kate’s mother in the past? Is this where Kate, Clint, and Eden pull Kate’s mom through from her death moment to the present?

The cover is confusing. Anyone reading this book would know that it’s Madame Masque in her clone of Kate body. Is it supposed to attract new readers? Or is it just a joke and I need to be less serious? Don’t answer that.

I do like Kate’s friends yelling at Clint to demand to know where she is. They are good friends.

Clint continues to be a mess. He’s always a mess so this is a consistent through thread. This plan is terrible. Of course, Eden and Masque were going to become instant friends, or instant allies. They do so much faster than either Clint or Kate plan, and that could be because Clint hit Masque on the head.

Bellaire’s choices of understated colors work well for this action sequences. You get a kind of always covered in desert dirt feeling here. While Romero’s art, as always, moves you through the action and is smart in what it shows and what it doesn’t.

The Hawkeyes both have similar fight moves. Which fits how their strengths are the same — and their usual hack of superpowers — and how Clint helped train Kate.

This all seems like too much. I guess this is what happens when your series is ending and you have to tie everything up with a bow. (I don’t know when Thompson knew she was going to be writing the new Avengers West Coast.)

There are just too many baddies. Too bad Kate can’t convince — or didn’t convince her father beforehand — to help them out. His persuasive powers would deeply come in handy. I do wonder if we’re ever going to figure out what happened to Kate’s mom. In the final issue.

The action here felt clunky in a way the other issues didn’t. Perhaps, again, it’s just too many characters. It was much cleaner when it was just Kate superheroing, but all these clones are a lot.

I do appreciate the running gag of Kate being badly rated on ride sharing apps.

It was a nice touch to have Clint’s hearing aids not work properly. I know I always think what would happen if I got into a fight and lost my glasses. It would be terrible, and I would definitely lose.

This wrap-up didn’t really hit home for me. Since we know there’s a sequel coming — kind of — the emotional punches felt better than if I’d thought there wasn’t one. If there wasn’t one, they were way too light. Too “to be continue” in tone.

Eden seeing her daughter Emma one last time was terribly sad. But Kate’s realization about her mother was less of a sad note. (Though mystery still mysterying, see above paragraph.)

Everything was neatly finished. All the bad guys went away, and they were delivered to Detective Rivera, who we trust to actually put them behind bars. Though it always seems as if the Hawkeyes should have some responsibility for property damage.

The reveal about Johnny having powers was interesting. But it seemed like perhaps it should’ve happened sooner. You know, when they’ve needed some backup in the last many issues.