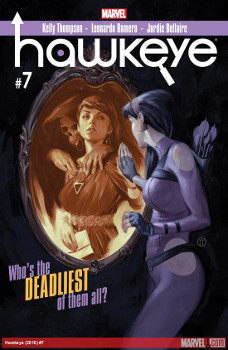 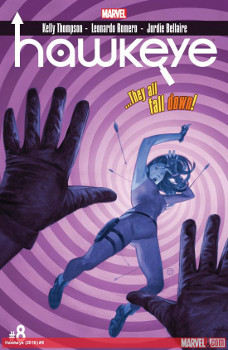 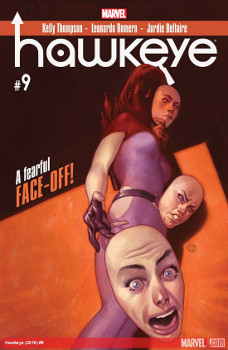 Considering the underlying mystery of the Hawkeye book has been about Kate’s mother Eleanor, it’s great to see the flashbacks and other connections to what happened to her. Also, sooner or later, Kate was going to have to hang out with her father Derek.

The art here was incredibly effective. I adored the flashbacks to little Kate. Her swimsuit with the holes in the sides were a nice call to Hawkeye’s costume. Jordie Bellaire’s choice to use the trademark Hawkeye purple in those scene as the only shading with the black ink works beautifully.

The bits of Kate’s relationship with her mother that we see is great. Eleanor may indeed have had a mental illness and needed help. That doesn’t mean she can’t also be a victim of some plot from Derek, or just some shitty thing a man with power would do to a woman he doesn’t want to be married to anymore.

The story about the triangle artist touched my heart. (Though where is Kate’s sister in all of this? Maybe other books with Kate have touched on this.)

Another part where Romero’s art shined was the fight scene where Kate beats up a bunch of henchmen in suits that she assumes are working for Madame Masque. (They’re actually working for her father.) The action was incredibly choreographed. Due to how Kate points out what she’s going to do before she does it, I wonder how this helps artists translate the author’s vision. I’m completely curious about Thompson’s and Romero’s collaboration process. Especially since (at the Big Two), artists can be put into a kind of factory.

I have to say that I was surprised Kate found Derek at the end. I did expect Madame Masque. I like when a comic book can surprise me in a good way.

This started out with a lot of promise. I liked that Kate’s new case got under her skin. I liked the scenes with her family and how the story flashbacked to them, and how you didn’t fully know that Kate still had her memories of seeing her father until the end.

I loved Kate calling out Derek on being a supervillain. Also, that he looks too young to ever be her biological father and how he sold his soul to Madame Masque for a younger body and powers. (Of course, now they’ve given Madame Masque the secret she’s been waiting for in order to give herself powers.)

Like did Derek not just assume that if he wiped Kate’s memory, she’d still be coming after him? She’s probably more likely to leave him alone now. Well, kind of, since she still doesn’t know where her mother is.

Romero’s layouts served these flashbacks so well, layering each one on top of the other.

What I didn’t like was the ending. I’m never a fan of these prize fighting rings. Seems like every superhero, sci-fi, or supernatural serial media has a forced prize fighting storyline. And there was just one in America. Which okay, Marvel has like 90 thousand titles going on right now, but I bet the America audience also read Hawkeye.

(I also don’t know which one came first as I’m definitely behind in my reading, but this is the order I read them in. You can reverse if you read them in the other order.)

This prize fighter issue turned out better than I thought it would. First, the prize fighting was contained in two issues. And second, it was really Kate’s friends and Detective Rivera who saved her butt. Seriously, she would’ve died from her injuries while wishing she had superpowers had she been forced to continue to fight. I don’t know how Liam survived so long.

I do continue to appreciate that Kate does fight with her brain. Which if she did have some superpowers, she might use her brain less and that would be a shame. Kate is already pretty impulsive.

The running joke about frozen peas is getting old. And yes, Kate does need to invest in some actual ice packs, and maybe learn a few other first aid tricks to help her when she needs it.

So this mysterious female figure at the end is either Madame Masque or Kate’s mother Eleanor. Or both.