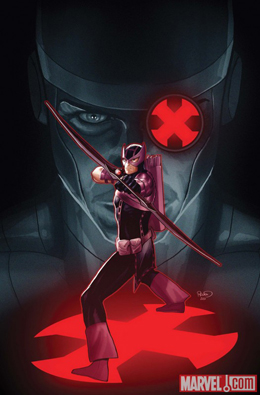 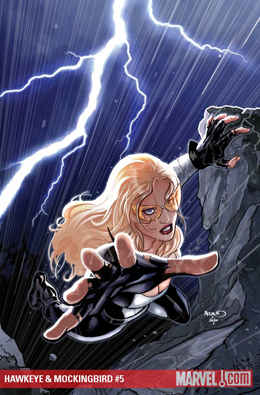 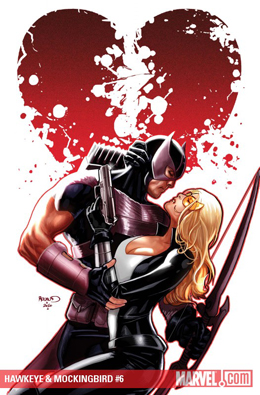 As guessed in the climax of #3, Hawkeye and Mockingbird did not die. But Dominic did. However, it appears that Dominic, like Captain Jack Harkness, can die and then come back to life. Well, isn’t that a handy trick?

I did love when Clint and Bobbi built a “bird’s nest” to save themselves from the blast. There’s nothing like superheros really working together to solve problems versus just beating up random bad guys and hoping your teammate got the ones you didn’t take out.

The Phantom Rider and Crossfire taking out families of the WAC team makes for good information about character backgrounds. I like learning more about Dom, Bangs, Twitch, and London. Twitch also makes another gay character in the Marvel universe. Huzzah.

Bangs and Dom pre-striking by taking out Crossfire’s facilities and money sources worked really well. I also loved the bit where Clint and Bobbi start getting schmoopy — him always more lovey-dovey than her — and then they’re interrupted with the complaint that the bad guys always show up to interrupt them. Adorable.

I really liked Bobbi pulling in the other Phantom Rider, Jamie’s dad, Hamilton Slade. Who apparently, Lincoln Slade didn’t like that his son didn’t follow him down the path of evil. Also good to know that Jamie’s been manipulated over going along with her grandfather’s evil ghost.

This seemed like a really fitting ending to this story-arc. Hawkeye & Mockingbird is fast becoming one of my favorite current comics and the one I can’t wait to read when it comes out.

One thing I’ve really appreciated about this book is Lopez’s art. I don’t know if I’ve mentioned it before, but I really think he does a great job drawing people’s bodies and staying true to how the characters look. Lopez is also skilled at facial expression during close-ups, which greatly enhances McCann’s storylines.

I thought that McCann’s writing was very smart here. The story called for a death, more than just Lincoln going back into his jar for all eternity. Jamie would’ve been the wrong call as she was technically an innocent. And well, Bobbi and Clint both just came back from the dead. That left Crossfire and Hamilton.

If Clint was hit by his action of pulling out Crossfire’s fake eye, Bobbi was hit by Hamilton’s death. And, of course, so was Jamie. I like that McCann left the plot open for Jamie to come back. It also felt real that Clint decided to leave Bobbi and W.A.C. because he was scared of the person he’d become around Bobbi. (This makes a lot of sense given that in large continuity, Clint basically replaced Steve Rogers as the heart and soul of the Avengers.) Though I do have this odd feeling that Clint will be back.

Wait? What? So this title is canceled? Thanks, Marvel. Or more like, thanks, fanboys, for not buying books that are actually good.

I really liked Bobbi’s time in the Savage Land with Dominic. It felt very real that she’d go back there to clean up the Skrull mess and the S.H.I.E.L.D. technology. And of course, I’m sure McCann wanted to write about dinosaurs because they’re awesome. I love that Bobbi can tell a Skrull from a human and pegs Nick as one right away. I love that together, she and Dominic can take out a Super Skrull. Pretty sweet.

The reveal of Dominic and his super solider powers was well done. However, I’m a little surprised that Bobbi already didn’t know about his origin. She is supposed to be a super spy. I do think it’s very her that she hasn’t decided if she’s going to help Dominic heal from the weird side effects.

Clint’s meeting with Crossfire was a little bit overdone. It dragged on. As was his flashback to seeing the Skrull Queen with an arrow in the side of her face when face-to-face in front of the fridge with Jessica Drew. Though I really don’t like how Lopez draws bigger breasted women.

As for Clint’s come-to-Jesus moment with Steve, it was funny. Funny and slashy. I suppose it was supposed to be angsty, but that’s just not how I can approach the emo angst of Clint.

And what’s going on with this series again? *pouts*