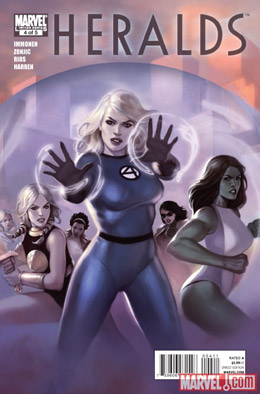 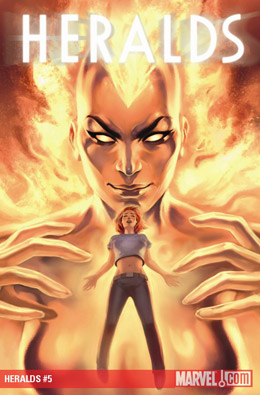 Because I’m now a master at telling who’s drawing this comic, I’m pretty Rios did the heavy lifting. Which makes me happy as I really enjoy her work a lot. She-Hulk’s short-hair was much more stylized and clear here. I approve.

Reed is quite the jerky know-it-all in this issue. Of course, perhaps he’s just acting like this since he didn’t figure out what was going on when they had both Frankie’s clone and Nova’s spirit in the labs.

Immonen does a wonderful job at portraying the tensions between the characters. Frankie curled up on the chair and not answering questions was perfect. As was the bickering between Johnny and Patsy.

Julie, Frankie’s former roommie, was nicely played. I loved her taking the superheros to task about the things they seemingly don’t care about. And her betraying them all to Nova. Emma’s reaction to telepathically scan Julie was very in-character.

I figured that when Sue brought along Valeria and then Valeria went on a walk with Frankie and Patsy that Nova would show up and cause problems.

Immonen does a wonderful job writing a story which is all about being a hero, not because you want to or feel it as your calling, but because you have to. Frances doesn’t want to become Nova. She doesn’t think she has it within herself. And she longs for and clings to the choice.

But when it comes down to it. When it’s her becoming Nova or Valeria or Sue dying, she does. She becomes exactly what she avoided.

I love the tears in space, and the team continuing to work together. I love the moment when Brand says she’s here because she’s a joiner. Hilarious.

Certainly, an interesting way to bring Nova back into the fold.

Overall, I enjoyed this miniseries. However, I rather wish there hadn’t been so many artists on the project as the art wasn’t as consistent as I would’ve liked it to have been. Or what was needed to push this from being a good story to a really good story.