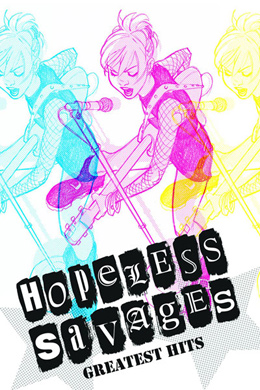 I’d been looking forward to reading Hopeless Savages for a long time. In fact, I’d spent a few years collecting the single issues when I’d find them in bins at comic shops before this handy-dandy trade came out. So when I had the chance to choose it as the July 2011 book for GeekGirlCon’s book club, I decided now was the time to read it. (It just took me a little longer to actually sit down to write my review.)

I pretty quickly fell in love with the Hopeless-Savages. Perhaps because part of me still has my punk rock heart and the other part of me loves a story about a caring, if odd, family.

I thought Van Meter did a wonderful job at introducing the family here. I have to say that just reading the description for this book, a tale about a family of punk rockers, I did not expect for Dirk and Nikki to get kidnapped at the start of this story.

My favorite scenes from this book were the flashbacks to when Zero was a kid and how much she looked up to her big brother Rat. And as I continued to read the entire collection, the flashbacks remained some of my favorite parts.

I adore that while the “big” mission was to save their parents, the real mission was to get Rat back from his commercial life being a marketing manager for not-Starbucks. Twitch, Zero, and Arsenal’s mission to get him back and reform him was hilarious. It completely set the tone for how off-the-wall this family is, and how much they really do love each other. That and going “normal” is completely the way someone from a punk rock family would rebel.

I thought it ending up being the Hopeless-Savages’ old manager looking for a money was a nice twist on the fame and fortune. And how the most important thing was to get Zero to her gig, and how her parents whole situation was more about the lesson in signing to record labels than anything else.

This was probably my least favorite story — not because it didn’t feel real — but perhaps it’s just that I am not a teenager anymore and haven’t been for a while. Zero’s crush on Ginger Kincaid was over-the-top in every way. Plus, the whole tie-in with the making of the reality show about the Hopeless-Savages just made it extra surreal. In that very special way that makes everything concerning teenage hormones bananas.

I was actually really glad for the flashback of the first time that Zero met Ginger and how she rescued him. I think it set up a nice dynamic for their relationship, and it took us out of the teenage hormones for a bit. Plus, it’s fun to see the kids all being kids.

My favorite part was probably Zero and Nikki’s conflict. It felt very classic mother-daughter. But, I greatly enjoyed the unique ways that Zero has to rebel and the ordinary ones too. You can tell that she and Nikki both love each other very much. Dirk’s constant cooking and hiding in the kitchen from them was adorable too. I’m totally with Nikki that teenage boys can be jerks. But Zero did form a bond with Ginger in science class.

I also enjoyed the contrast of Twitch adding his romantic perspective with his story about Henry’s and his relationship. I like how it further reinforced how everyone was seeing their own relationships reflected right back in Zero and Ginger’s.

Book 3: Too Much Hopeless Savages

This was by far my favorite Hopeless Savages tale. Perhaps because Arsenal is super awesome, and when you think the entire family can’t get into any more trouble, take them all to Hong Kong.

I love that not even their grandma “gets” them. But I also like how she’s living a bit of her own unconventional life with her much-younger preacher boyfriend. Both grandmas — especially Grandma Shi as both witch and spy — in this story served as such great side characters that made everything that much more chaotic. Coupled with the rest of the family just deciding to join Arsenal, Claude, Twitch, and Henry on their vacation. Surprise!

The shenanigans surrounding the Bauhinia Blossom were pretty ridiculous. But I’m glad that it didn’t take away from the heart of the story, the family and their dynamic; it only added to how they protect each other. Despite Arsenal thinking she’s pregnant, she’s the one running all around Hong Kong saving her family. I’m glad that Arsenal got her fight and her alliance with Angus and was able to move on from her trauma. Even if she’s still worried that she may never have children.

Rat getting a girlfriend was cute, and I hope that we see her in the future comics.

I do think it was interesting to take this comic out of Zero’s world. Yes, she’s still the main narrator as the story is framed by her letter to Ginger about her family’s trip to Hong Kong, but this story is really about Arsenal. And I think Arsenal proves to be a more interesting — at least to me — family member. Van Meter says that she has other Hopeless Savages stories to tell, and I wonder who’s point-of-view they will be from. There are certainly tales to tell that Zero might not have all the facts to.

On a closing note, I can’t think of a better pet for Zero.

I really loved the issue about how the Dust Bunnies came together. It seemed to be one of the most organically flowing issues from the series. I bet Van Meter had it in her head for a while before she wrote it down. I like Zero as this hub of accepting people for who they are. And helping her mom and Paula make friends and Emma and Tobey meeting each other.

All the rest of the stories were pretty cute. Though I wasn’t too enthralled with the parents’ night at the school tale; mostly because I have a personal disconnect from that. When we read this for GeekGirlCon’s Book Club, a few people thought that Zero’s phrases dictionary should’ve been at the beginning of the book. I was okay with it being at the end, but I did get most of her made-up slang. (Probably my high school obsession with cockney rhyming slang coming in a bit handy.)

I liked seeing Dirk lose his patience with the kids, considering in the other tales, it’s been Nikki. But in a healthy, sometimes parents get mad at their kids way. It was fun to see Arsenal meet Claude and Twitch and Henry meet because of them.

Probably the more touching tales were the last two. Seeing the whole family come together when Henry and Twitch move into together was just sweet. And of course, chaotic and Zero would so focus on making sure they had proper music. And the story about the neighbors over the years was also sweet. How despite their annoyances, they ended up caring for the Hopeless-Savages.

I’m really looking forward to see what Van Meter has coming up next for this family.