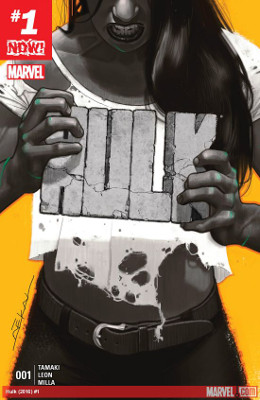 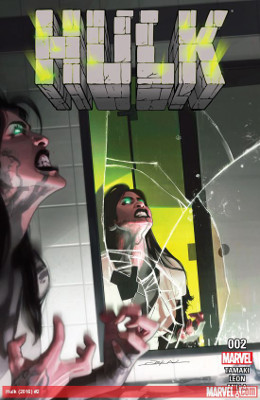 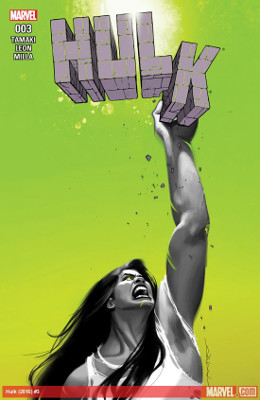 This issue was a slow start. The energy was pretty lowkey. It wasn’t terrible, but it didn’t blow me out of the water.

I don’t know all the details about Jen and the ability for her to Hulk out. I liked that she refused to tell others as it wasn’t any of their business. But not having followed the massive crossover, I assume she cannot Hulk out. Or it’s closer to Bruce’s Hulking.

Miss Brewn looks familiar. But I’m not sure which spider character she is. So much to keep track of these days. (Or she just reminds me of The Stalk without the self-confidence.)

The cake making videos on YouTube crack me up. It’s true that they’re calming. Of course, when I watch someone else making food on video, I just want to get into my kitchen. There would be lots and lots of baking.

Leon’s art is really great so far. It fits the tone of the book well.

Curious to see where this goes.

I was pretty surprised to find that two artists worked on this book. Leon’s and Talajic’s pencils flow together, and however they figured out their collaboration, it worked. Bravo.

I feel like this book is going to be a sleeper hit. Like at first, I’ll find it okay, good, yet not great, but then bam, it will rise. Like all those feelings Jen’s trying to press back down. Or all those cakes she’s watching being mixed.

Of course, there are children playing Avengers in the park. Of course, those children are playing the scene where Hawkeye kills Hulk. The funny thing about reading this book (and reading Mockingbird) is that I know Hawkeye killed Hulk and there was a trial. I know Jen was gravely injured and in a coma for a while (from reading Patsy Walker: aka Hellcat). But I don’t know the actual details. These children and their re-enactment is the closest I’ve gotten to the source text. Also, I don’t care enough about shitty events to look it up, Marvel.

Bradley is also going to be one of those characters who does the slow burn thing. But I really want Angie and Hei Hei to show up and for her to contest him for the job. Best and most hilarious plot ever. (Obviously Bradley stays assistant and Angie does paralegal.)

This book continues on its slow burn. Hopefully, Jen jumps into some action with Maise sooner rather than later. Especially since those cops just got taken out by whatever else is living in Maise’s apartment and praying on her.

I liked the comparison of how Jen sees herself as She-Hulk when she’s in the elevator and her looking through Maise’s life pre-Terrigan gas. Both of them were arguably much happier.

I have mixed feelings about Jen pushing away Hellcat. In the past, Jen’s been the one there for Patsy through Patsy’s fuck ups and downturns. But here, Jen cannot handle when the situation’s reversed. I suppose we can ask if anyone’s helped Jen out since she became She-Hulk or since Bruce gave her the blood transfusion that saved her life and made her She-Hulk.

It’s clear that Jen’s Hulk powers are looming under the surface. It’s still unclear, as a reader of only this book, why Jen wouldn’t have explored trying to make them open up. Instead, she goes about suppressing them. I’d like more information please.