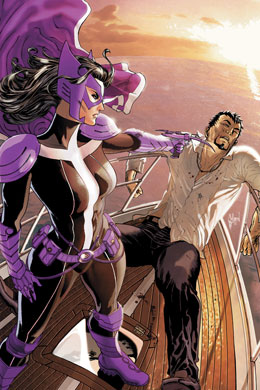 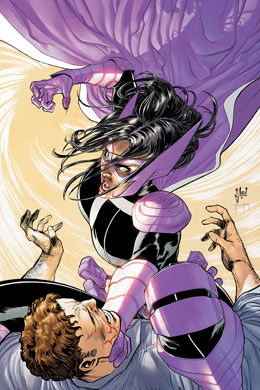 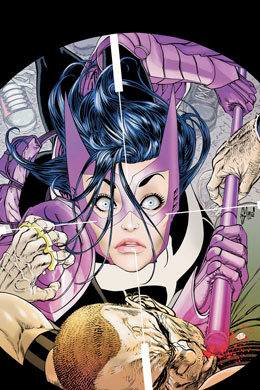 I’m not sure how I feel about this being Helena Wayne, not Bertinelli. I have to say that Bertinelli in my favorite version of Huntress, and I think she’s going to be the one that most readers who love Huntress will be looking for. Especially considering the great work that Gail Simone and Greg Rucka have put into Bertinelli over the past few years.

Helena’s not very sneaky. It seems to me that if you’re taking out mob bosses that you’re going to try to be as sneaky as possible. Or not let them know who’s coming after them to take them down.

The plot itself is getting a little too complex. I’m having a bit of a hard time following it, especially as it does international politics and strife with the Gaddafi-esque character. (And who knows what the rules of Earth 2 are.)

Helena leaving Moretti on his ship at the mercy of the women he’d kidnapped and been using a slaves seemed to be a fitting punishment. Except in that the women will then get arrested for murder and extradited back to their country. Bit of a long term fail.

I’m very much appreciative that Huntress just goes in and gets the job done. She plans. She goes after what she set out to do, and she does it. I’m interested to see if she really killed the Chairman.

This issue makes it a lot more obvious that she’s Helena Wayne. But all the references to her father make me think that she didn’t really kill this guy. We all know the Batman-rule.

The use of technology was smart. But Levitz went a little too far on the anti-Italy views. Yes, Italy’s government is corrupt, but it is still part of the EU. Seems a little strange that this Chairman fellow could get asylum there. Of course, who knows that the DCU’s Europe structure even looks like.

There be no Batman rule. Just some manipulation of Ibn Hassan. Love that Huntress is going to make him donate millions to women’s charities. Of course, she probably should’ve specified which charities. Though I suppose that’s what follow up communication is for.

I’m such a huge fan of her and Power Girl teaming up. I think I’ll add World’s Finest to my pull list. Or trade pull list probably. Or title I’ll pick up eventually. (Since I’m pretty crap right now at keeping up with my pull list.) I’m not sure that I’d read a Helena Wayne tale on its own — okay, I probably would — but adding Kara is awesome.

Though I’m still having a hard time with Italy hiding the Chairman since the EU exists in this world.