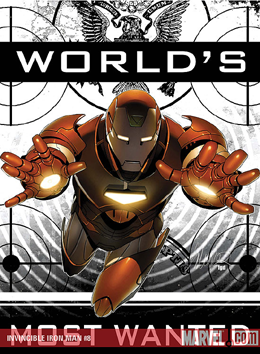 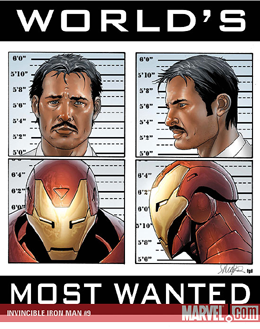 This title is really good. In fact, it’s probably one of my favorite current titles. I think that Osborne killing the Skrull Queen and taking over S.H.I.E.L.D., now H.A.M.M.E.R., has really opened the storyline for interesting side plots about Tony Stark. It’s not just that someone has taken over Tony’s job, it’s that Osborne is evil.

This story has a little espionage as Tony kills the superhuman registration database (Osborne still really wants to know who Spider-Man is), a little humbling when Tony falls from the sky without Extremis, and an awesome formation of a new team — Tony, the always competent Maria Hill, and the newly super powered Pepper Potts. Sweet.

#9 reveals that Tony’s brain is a harddrive, and the only way to erase that harddrive and make sure Osborne doesn’t get the knowledge is to kill Tony’s brain. While I don’t believe that they’ll actually kill off Iron Man, I do think this makes a nice “be careful what you wish for” for those who thought Iron Man should’ve died instead of Captain America.

I really enjoyed Fraction’s touches on just how bad Tony was when he was a drunk. How he made the computer ask him if he was sober (twice) before letting him take out Iron Man. How two people — Maria Hill and Pepper Potts — have their parts in erasing his mind because Tony did not trust himself. Yet, he utterly trusts himself with every Stark Tech, S.H.I.E.L.D., and U.S. government secret because he is still utterly convinced that he’s a good guy.

Fraction does a wonderful job at showing Maria’s “fuck you” reaction and how she has to be tricked and then come around the idea. (Always points for Maria escaping on her own from H.A.M.M.E.R.) And Pepper’s absolute heartbreak on having to follow these final orders from her beloved boss.

I think that Fraction is doing to Iron Man what he and Brubaker did to Iron Fist. He took a character who’d gotten a bit washed up or washed out from too many writers in Iron Man’s case and revamped him. Stark is both determined and utterly human, no matter how much tech he has in his body. He’s being a classic superhero. He’s protecting the world from a heinous villain. Of course, that villain happens to want information stored in his head.

My only critique is the art. It’s not so great. Humans do not kiss like this:

0 Replies to “I am Iron Man: Why Invincible Iron Man is an Excellent Comic”