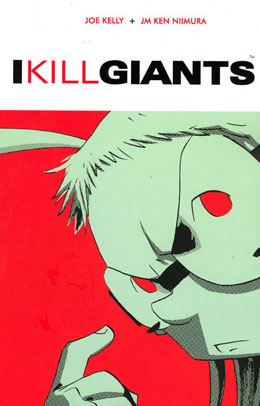 This is the type of book you just want to give a hug. It’s brilliantly written and drawn with a huge heart and powerful message. Barbara Thompson is all the stands between the world and it being destroyed by giants.

I don’t want to say a lot about the actual plot and the giants themselves as I believe I Kill Giants is more beautiful a read not knowing the end. Not knowing the source of the monsters and the tension between Barbara and her family. I suggest not reading descriptions of the book.

Kelly wonderfully crafts Barbara’s point-of-view and keeps it age-appropriate. Her family, schoolmates, and those who care about her are fleshed out in a way that you can see beyond just what Barbara sees. And Niimura’s delicate pencils bring it all together.

Ms. Molle, the guidance counselor, is probably my favorite character in the book. She’s that instructor who goes above and beyond to understand Barbara’s reality and her world. Ms. Molle’s that special adult who makes the sometimes horrible world of growing up all that better.

Sophia, the young girl Barbara becomes friends with, brings another ally onto Barbara’s side. Their alliance against the school’s bullies and Sophia’s belief in the giants provide a great female friendship. I appreciate that they have bumps in their friendship too. It’s very real.

As for the Giants, they are well done and well thought through. For dealing with such a big monster, I Kill Giants is incredibly poignant and heartfelt.

Join Barbara in her fight against the giants, buy I Kill Giants